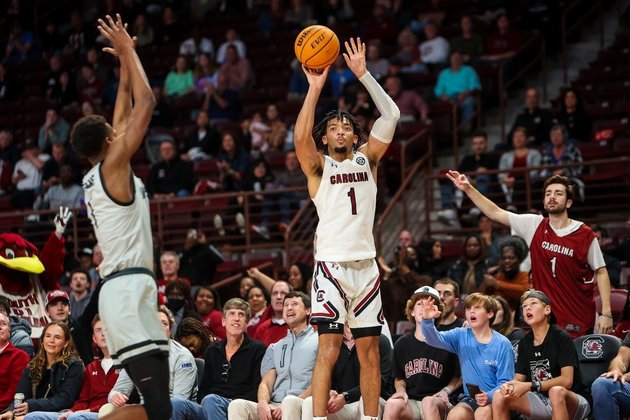 South Carolina aims to start a two-game road swing in Washington, D.C., with a win on Wednesday against George Washington.

"It opens up our offense when we can get multiple guys that are a real threat out there," first-year South Carolina head coach Lamont Paris said. "When (Jackson) is doing stuff around the basket, it puts a lot of pressure on the defense when he gets going full-bore and he's effective as a finisher."

South Carolina shot just 4 of 18 from behind the arc in the win, and Jackson sank three of those deep shots.

The Gamecocks did improve their ball-handling in the win, though, turning the ball over a season-low seven times. It was the first time all season South Carolina had less than 10 turnovers. The Gamecocks also shot a season-best 47.5 percent from the floor.

South Carolina beat USC Upstate without Chico Carter and Meechie Johnson, who were both sidelined with ankle injuries. Paris said Monday that both Carter and Johnson have "progressed to some degree" but Carter is "a little bit closer" to returning.

Wednesday will be the fourth straight home game for George Washington (4-2). South Carolina will be the first Power 5 opponent the Colonials have faced this season.

During this home stretch, George Washington head coach Chris Caputo has tried to emphasize engagement with the students and fans.

"It's what can make this special as we move forward," Caputo told GW's student newspaper, the Hatchet, recently. "It's as much a part of what we need to do here as anything else, is create that really special bond with the students. They really brought it, and I expect them to bring it every time school is in session."

GW is coming off a 75-54 win over New Hampshire, in which Brendan Adams scored 25 points for the Colonials. Adams also had seven rebounds and three assists in the victory.