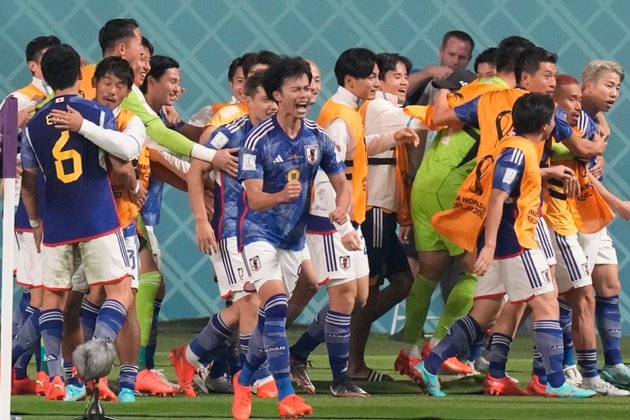 The Germans had dominated the contest at the Khalifa International Stadium and taken the lead with a 33rd minute penalty from Ilkay Guendogan after Japan goalkeeper Shuichi Gonda had fouled wing back David Raum.

The second goal never came, however, and Japan's raids into the German half became more and more frequent, culminating in Doan's equalizer and a brilliant finish from Asano 8 minutes later.

The defeat was the third in a row in the opening match of a major championship for Germany after a loss to Mexico at the 2018 World Cup, when they bowed out in the first round as champions, and to France at Euro 2020.

Spain thrashed Costa Rica 7-0 , their biggest ever winning margin at a World Cup, helped by two goals by Ferran Torres and strikes by five other players to send a resounding message to the rest of the teams in Qatar.

Spain was mindful of the shock defeats suffered by Argentina and Group E rivals Germany against lower opposition in their opening matches and they tormented Costa Rica from the start, going up 3-0 after little more than 30 minutes. 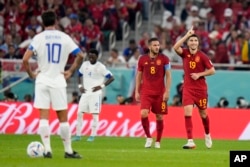 Dani Olmo got the goals flowing in the 11th minute when he exchanged passes with Gavi and chipped Costa Rica goalkeeper Keylor Navas. Ten minutes later, Marco Asensio timed a run into the box perfectly to connect powerfully with a Jordi Alba cross.

Torres stroked home his penalty in the 31st minute and the Barcelona winger claimed his second in the 54th when he took advantage of hesitant defending. Gavi, the youngest player to represent Spain at a World Cup, struck with a perfectly hit volley in the 74th minute before substitutes Carlos Soler and Alvaro Morata rounded off a the one-sided encounter.

Croatia, runners-up at the last World Cup, was held to a 0-0 draw by Morocco at the Al Bayt Stadium on Wednesday in their opening Group F match.

The Croats, beaten by France in the 2018 final in Moscow, had the better of the chances, with Dejan Lovren's shot cleared off the line and Nikola Vlasic's close shot saved by the legs of Morocco goalkeeper Yassine Bounou.

Morocco striker Youssef En-Nesryi might have given the north Africans an early lead but was unable to get a decent touch onto Hakim Ziyech's dangerous cross. In the second half Achraf Hakimi's powerful free kick was parried by Croatia goalkeeper Dominik Livakovic.

Belgium and Canada play at 19:00 GMT in Wednesday's other Group F match at Al Rayyan.