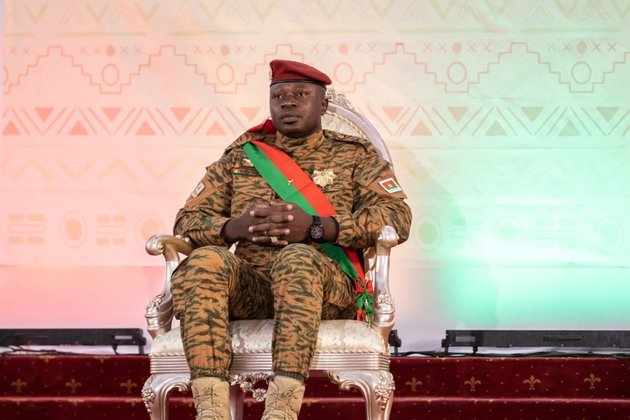 OUAGADOUGOU, Burkina Faso - Burkina Faso's ousted coup leader Lt. Col. Paul Henri Sandaogo Damiba left the country for Togo Sunday two days after he himself was overthrown in a coup, while the new junta urged citizens not to loot or vandalize.

Damiba's departure was confirmed by two diplomats who spoke to The Associated Press on condition of anonymity due to the sensitivity of the matter. It was not known whether Togo was his final destination.

Earlier Sunday, religious leaders who had mediated between the factions said that Damiba had offered his resignation as long as his security and other conditions were met. A junta representative later announced on state television that their leader, Capt. Ibrahim Traore, officially has been named head of state following the Friday coup that ousted Damiba.

Their power grab marked Burkina Faso's second military coup this year, deepening fears that the political chaos could divert attention from an Islamic insurgency whose violence has killed thousands and forced 2 million to flee their homes. It followed unrest in Ouagadougou, the capital, in which mobs on Saturday attacked the French embassy and other French-related sites, wrongly believing that they were sheltering Damiba.

Along with agreeing not to harm or prosecute him, Damiba also asked Traore and the new junta leadership to respect the commitments already made to the West African regional bloc ECOWAS. Damiba, who came to power in a coup last January, had recently reached an agreement to hold an election by 2024.

In a statement late Sunday, ECOWAS said it would be sending a team of mediators to Ouagadougou on Monday including former Niger President Mahamadou Issoufou.

The ECOWAS statement, signed by Guinea-Bissau President Umaro Sissoco Embalo, noted that Damiba had resigned 'in order to avoid a violent confrontation and possible bloodshed.'

Earlier in the day, the new junta leadership had called for an end to the unrest that engulfed Ouagadouou in wake of Friday night's coup.

Burkinabes React to News of 2nd Coup in 8 Months

In a statement broadcast on state television, junta representative Capt. Kiswendsida Farouk Azaria Sorgho called on people to 'desist from any act of violence and vandalism' especially those against the French Embassy or the French military base.

Anti-French sentiment rose sharply after the new junta alleged that interim president Damiba was sheltering at a French military base following his ouster. France vehemently denied the allegation, but soon protesters with torches thronged the perimeter of the French Embassy in Ouagadougou.

Saturday's violence was condemned by the French Foreign Ministry, which denied any involvement in the rapidly developing events. French Institutes in Ouagadougou and the country's second-largest city, Bobo-Dioulasso, had also been targeted and French citizens were urged to be very cautious.

'The situation is very volatile in Burkina Faso,' a French spokeswoman told The Associated Press on Sunday.

Damiba came to power in January promising to secure the country from jihadi violence. However, the situation only deteriorated as jihadis imposed blockades on towns and have intensified attacks. Last week, at least 11 soldiers were killed and 50 civilians went missing after a supply convoy was attacked by gunmen in Gaskinde commune in the Sahel. The group of officers led by Traore said Friday that Damiba had failed and was being removed.

To some in Burkina Faso's military, Damiba also was seen as too cozy with former colonizer France, which maintains a military presence in Africa's Sahel region to help countries fight Islamic extremists.

Some who support the new coup leader, Traore, have called on Burkina Faso's government to seek Russian support instead. Outside the state broadcaster on Sunday, supporters of Traore were seen cheering and waving Russian flags.

In neighboring Mali, the coup leader has invited Russian mercenaries from the Wagner Group to help with security, a move than has drawn global condemnation and accusations of human rights abuses.

Conflict analysts say Damiba was probably too optimistic about what he could achieve in the short term but that a change at the top didn't mean that the country's security situation would improve.

'The problems are too profound and the crisis is deeply rooted,' said Heni Nsaibia, a senior researcher at the Armed Conflict Location & Event Data Project, adding that 'militant groups will most likely continue to exploit' the country's political disarray.