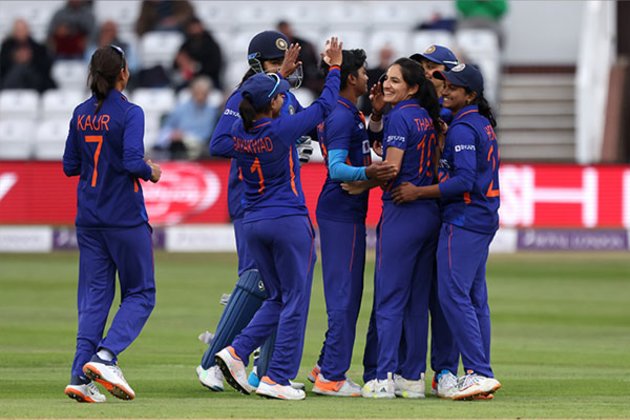 Captain Harmanpreet Kaur's explosive unbeaten hundred (143) and brilliant spell from pacer Renuka Singh (4/57) helped India defeat England by 88 runs in the second ODI of the three-match series at Canterbury to clinch the series on Wednesday.

The Indian women's team registered their second-ever ODI series win in England. The last time the team achieved the feat was in 1999.

Harmanpreet Kaur registered her fifth ODI century and became India's second-highest century scorer in ODIs, next to Smriti Mandhana (5) and former batter Mithali Raj (7). Harmanpreet's finest ODI performance was against Australia in the semi-final of ICC Cricket World Cup 2017, where she scored an unbeaten 171 off 115 balls with 20 fours and seven sixes.

Speaking on SPORTS18's daily sports news show 'SPORTS OVER THE TOP', former India selector Saba Karim said, "Incredible achievement and India has done this after 23 years if my memory serves me right. Wonderful performance by the ladies. It was so great to see Harmanpreet bat in that manner, she's batting with far more freedom which is very heartening to see. I feel at this stage the Indian side is largely dependent on Smriti Mandhana and Harman, whenever either one of them scores the other batters on the side tend to ride the wave, which is perfectly fine. So, it's good to see the Indian team doing so well in England."Coming to the match, in the first innings, India registered a massive 333/5 in 50 overs, their highest total on English soil. Captain Harmanpreet Kaur smashed an unbeaten 143 off 111 balls with 18 fours and four sixes and had a 113-run stand with Harleen Deol, who scored 58 off 72 balls. Opener Smriti Mandhana also played a crucial knock of 40 off 51 balls. Charlie Dean was the leading bowler for England with 1/39.

Defending 334, pacer Renuka Singh (4/57) dismantled English top order. Danni Wyatt (65), Alice Capsey (39) and captain Amy Jones (39) offered some resistance temporarily, with Wyatt and Capsey stitching a 55-run stand, followed by a 65-run stand between Wyatt and James. But the hosts were nowhere in contention after these two stands and lost wickets quickly. They lost the game by 88 runs after being bundled out for 245.

Karim also spoke about how team India has improved performance over time.

"Yes, and the others are learning from them. You see Harleen Deol putting some runs on the board. In the previous match, Yastika Bhatia who came to bat at number three, she's doing very well. I think both these batters, Harman and Smriti Mandhana can bat with more freedom and they can express themselves in the freedom that they are others who are backing them, that is something that is happening right now," said Karim.

"The gradual improvement in performance from the other batters in the lineup, in addition to Harmanpreet and Smriti Mandhana, speaks volumes of the kind of effort these girls have made in the preparation and now the execution of the game plan," he added.

Karim believes that Australia -the host country- are the favourites to win the T20 World Cup. The Men in Yellow are the defending champion in the tournament.

"I think they remain a formidable side and are the favourites. More so because they are playing on Australian soil and the kind of changes, they have brought into the team, reflects that they are in sync with what is required to win such tournaments in Australia," said Karim.

"Big ground, so you need some more power hitters, so they bulk up that kind of portion in the side. So, they have Tim David and Glen Maxwell. For instance, in this team, you don't have Mitchell Marsh and Marcus Stoinis, both of them very high in terms of power hitting. So, this kind of combination makes them a very strong side to retain the T20 World Cup again," he added.