Who did the Russian bicycle troops fight 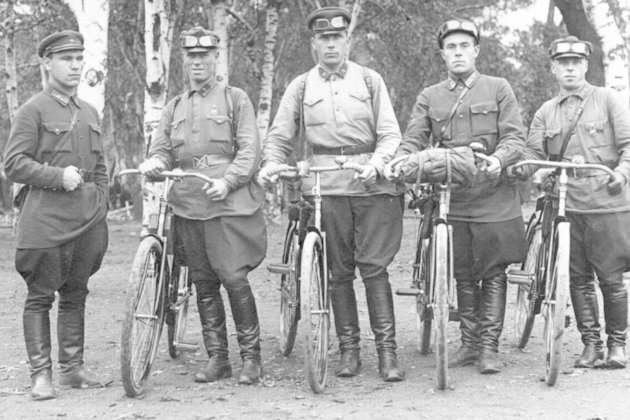 Several military cyclists are buried just by the Moscow Kremlin Wall. Even a street in the capital is named in their honor.

They could approach the enemy's positions quickly, quietly and unexpectedly, strike hard and no less swiftly escape. In the early 20th century, when cavalry was already a thing of the past, but the era of motorized infantry hadn't yet arrived, mobile bicycle troops were hugely popular in the armed forces of different countries around the world. 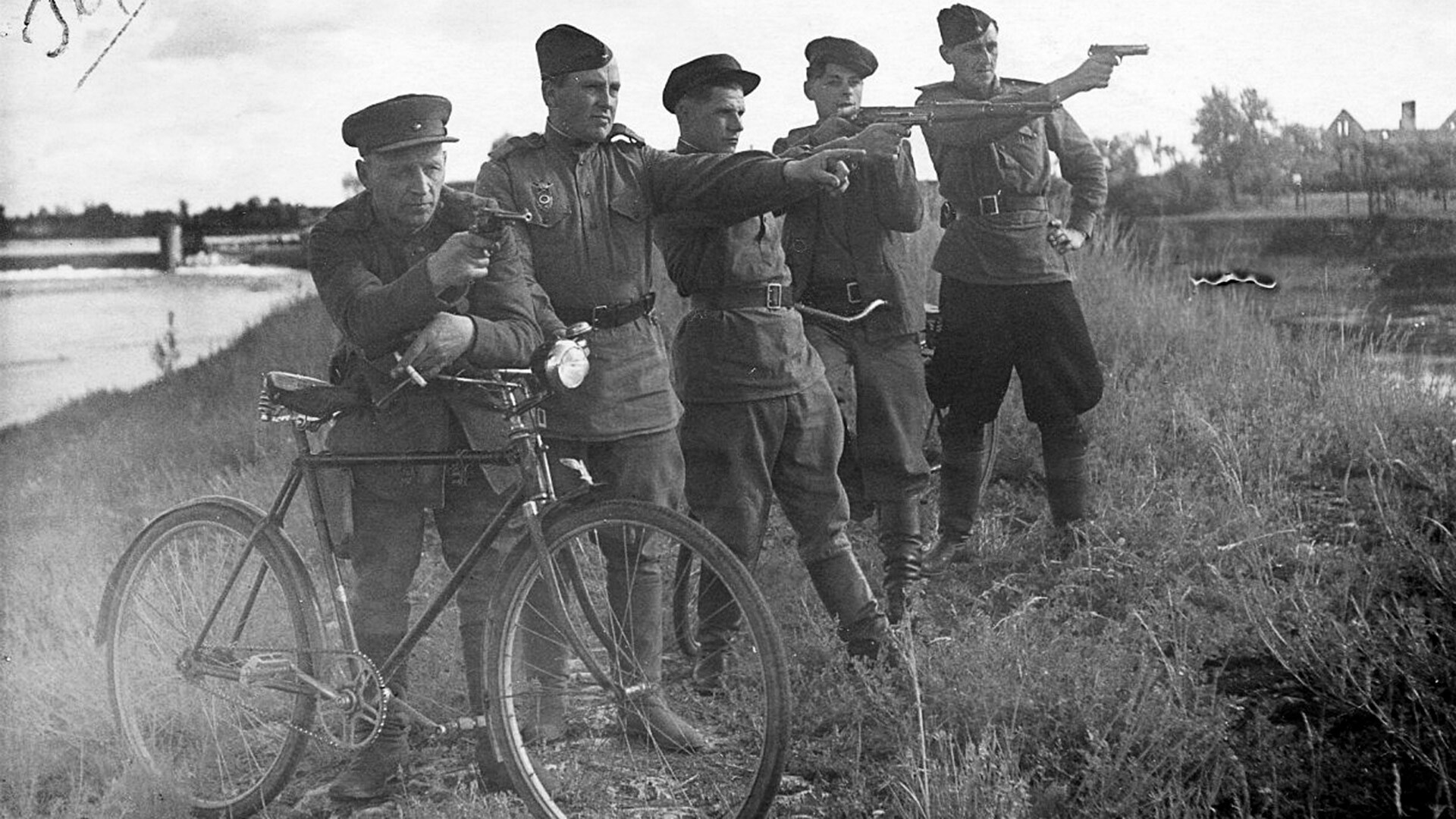 There is neither a need to feed the bicycle nor fill it up. It doesn't require any special repair, while it can carry small loads - something a human couldn't do. Moving at the same speed as a cavalry (6-12 km/h), bicycle troops could cover a distance of up to 120 kilometers in 24 hours. All that was needed was a decent road and warm weather. 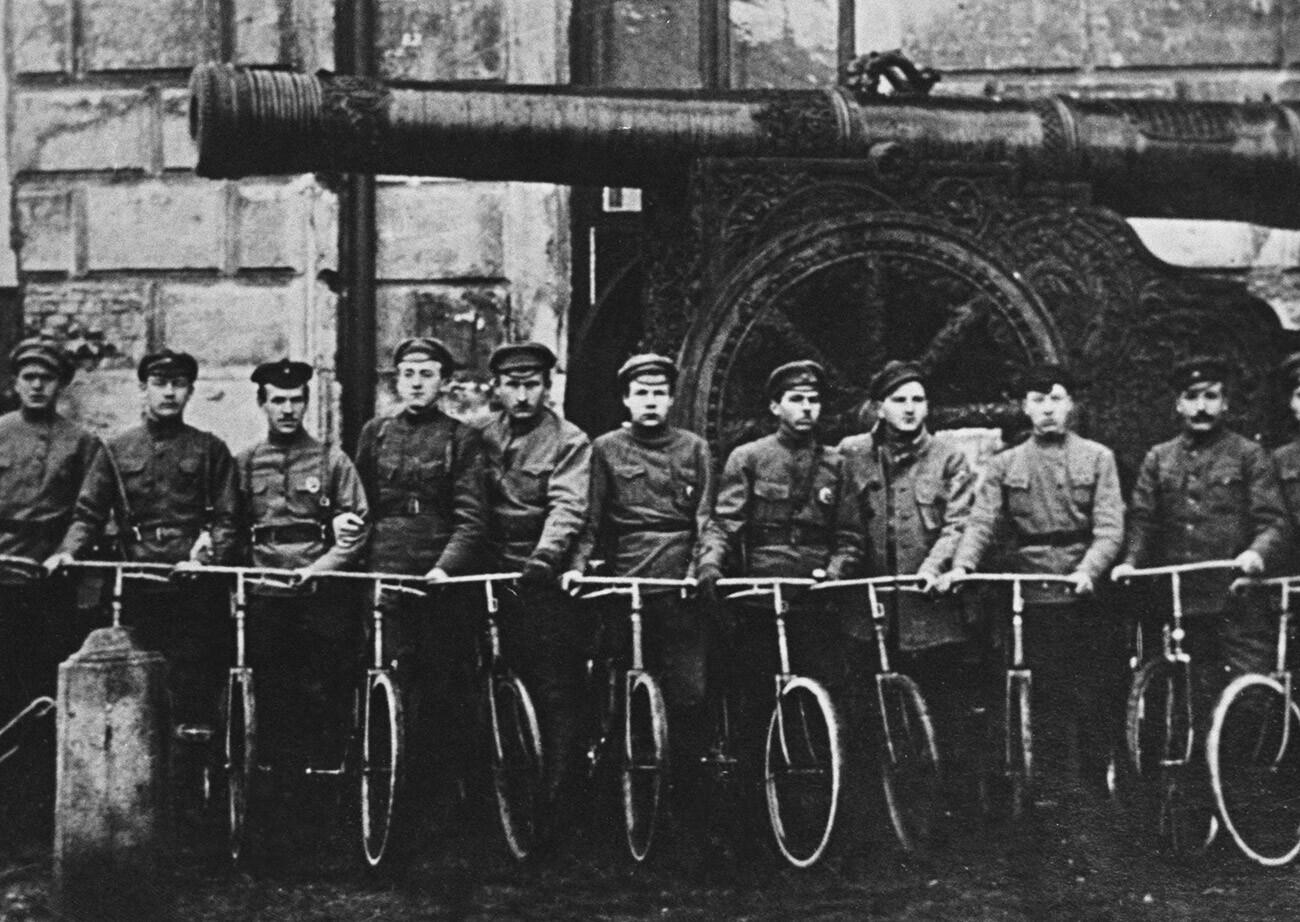 Signal unit of the Red Latvian Riflemen in the Kremlin, 1918.

Military bicyclists were called samokatchiki ("bicycle infantry") in the Russian Empire. Its first bicycle units date back to 1891. Having left their two-wheelers in the rear, the soldiers were to fight as conventional infantry, but, in contrast to it, they boasted a number of advantages in speed and maneuverability. By 1917, over 30 bicycle units had been formed in the Imperial Russian Army. 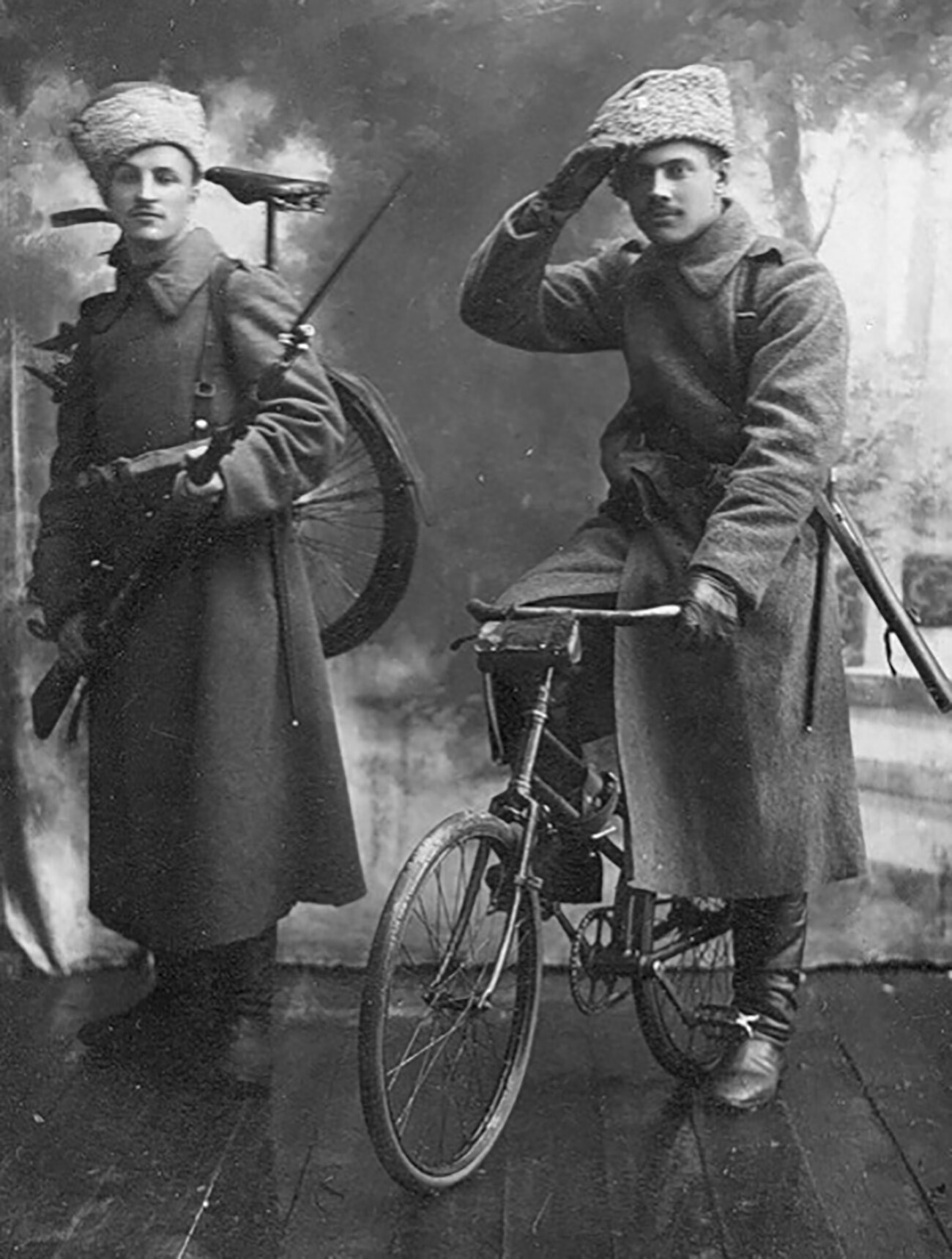 Bicyclists of the Imperial Russian Army, circa 1916.

The bicycle troops' arsenal included handguns, machine guns, mortars and grenades, which were attached to bicycle frames with special brackets. Part of the equipment and ammunition could be carried on large bike racks (or in cargo baskets). 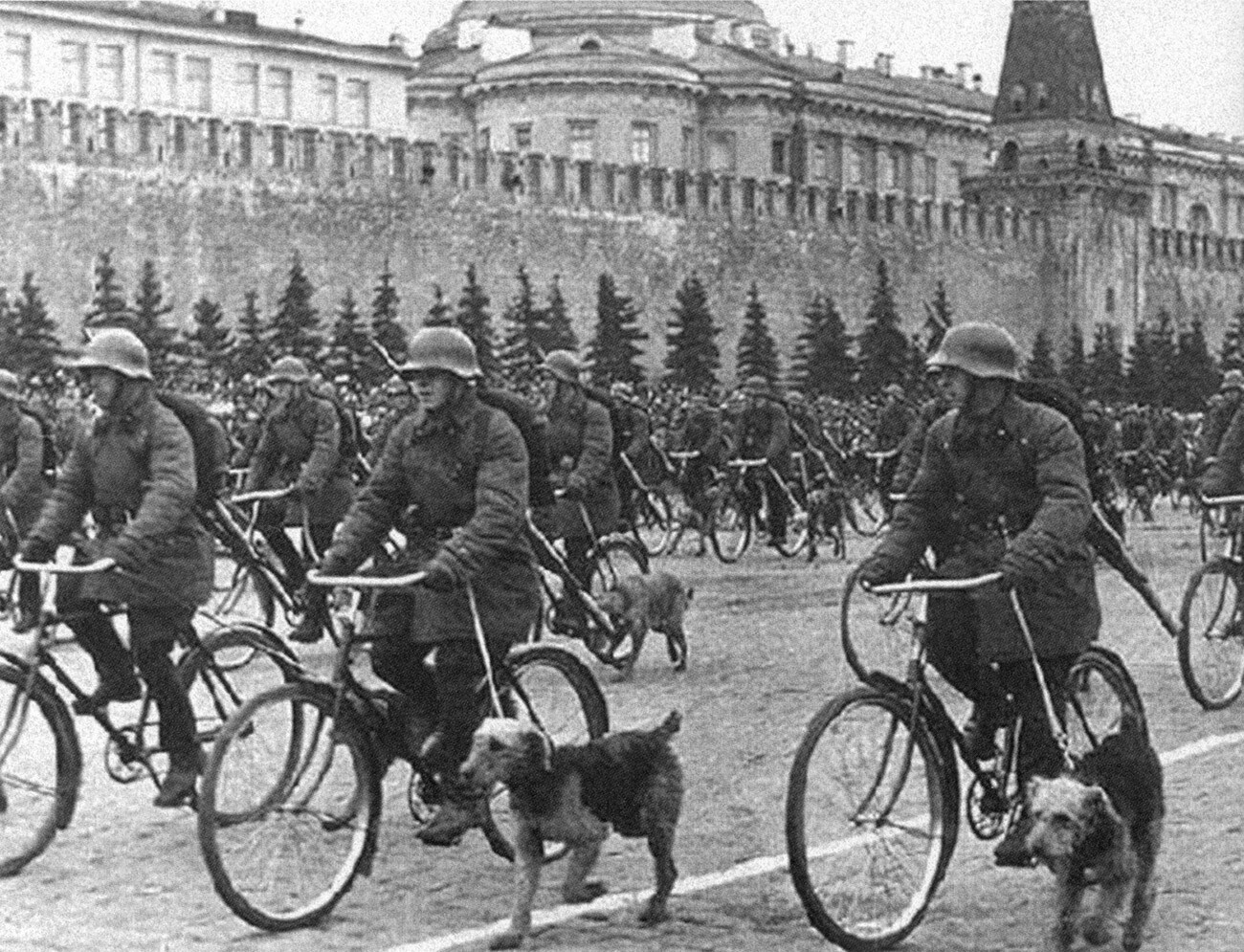 Bicycle troops during the parade on Red Square, 1938.

The Russian bicycle infantry were initially equipped with French 'Peugeot Gerard' bikes. In the course of World War I, they were replaced with Russian-made Dux Boevoy ("Dux combat") ones, designed by Russian inventor Mikhail Shchipanov and considered the best in the world at the time. 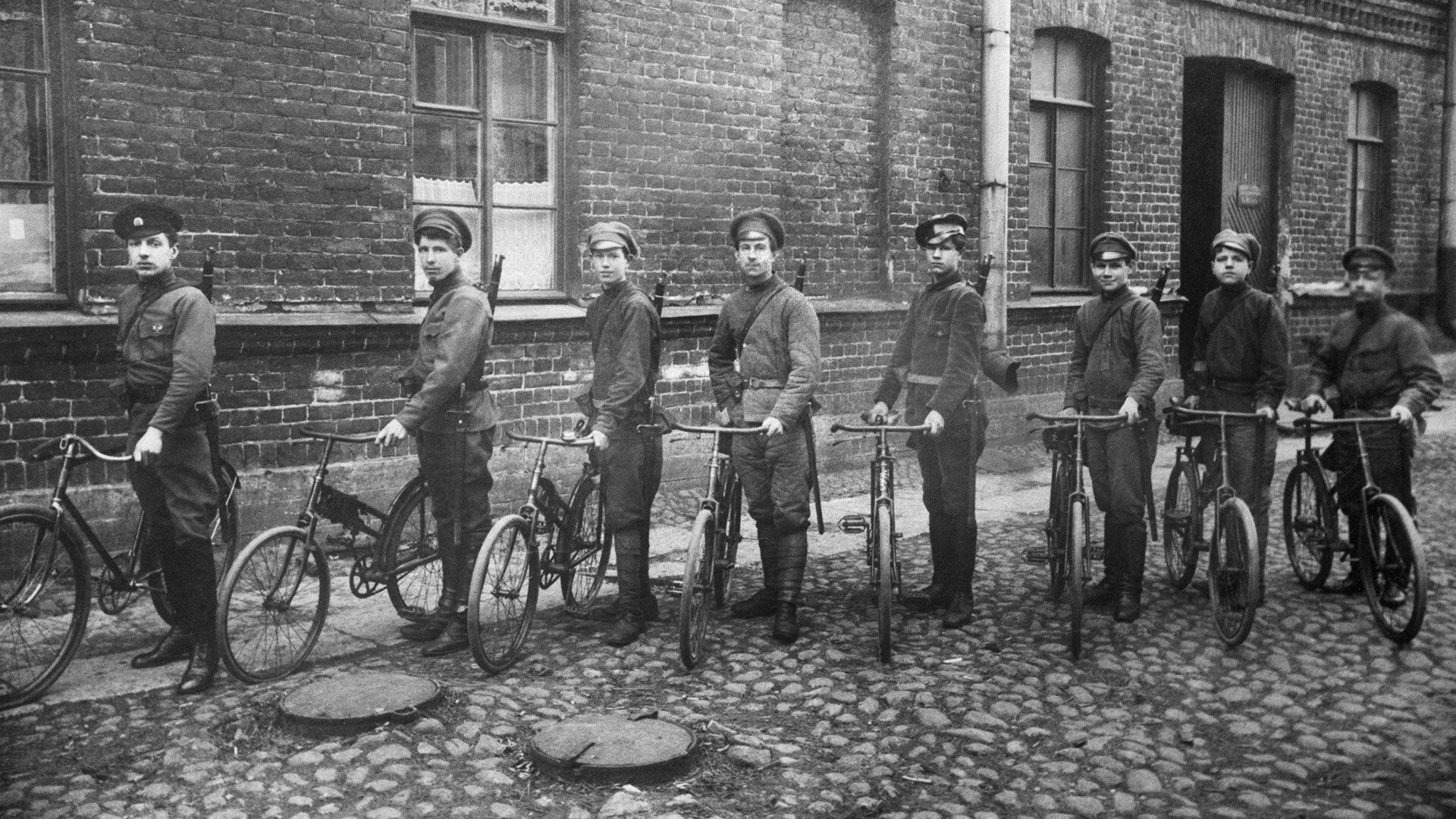 On the battlefields of the "Great War", the bicycle troops were deployed as scouts or signal personnel; also, they were supposed to cover the cavalry and infantry. Thanks to their noiselessness, they launched effective night attacks against the enemy. The command also used them as a highly mobile reserve force to compensate for defense breaches or, alternatively, to strengthen the army's position in enemy territory more quickly during offensives. Due to their specific nature, bicycle units didn't typically take hostages. 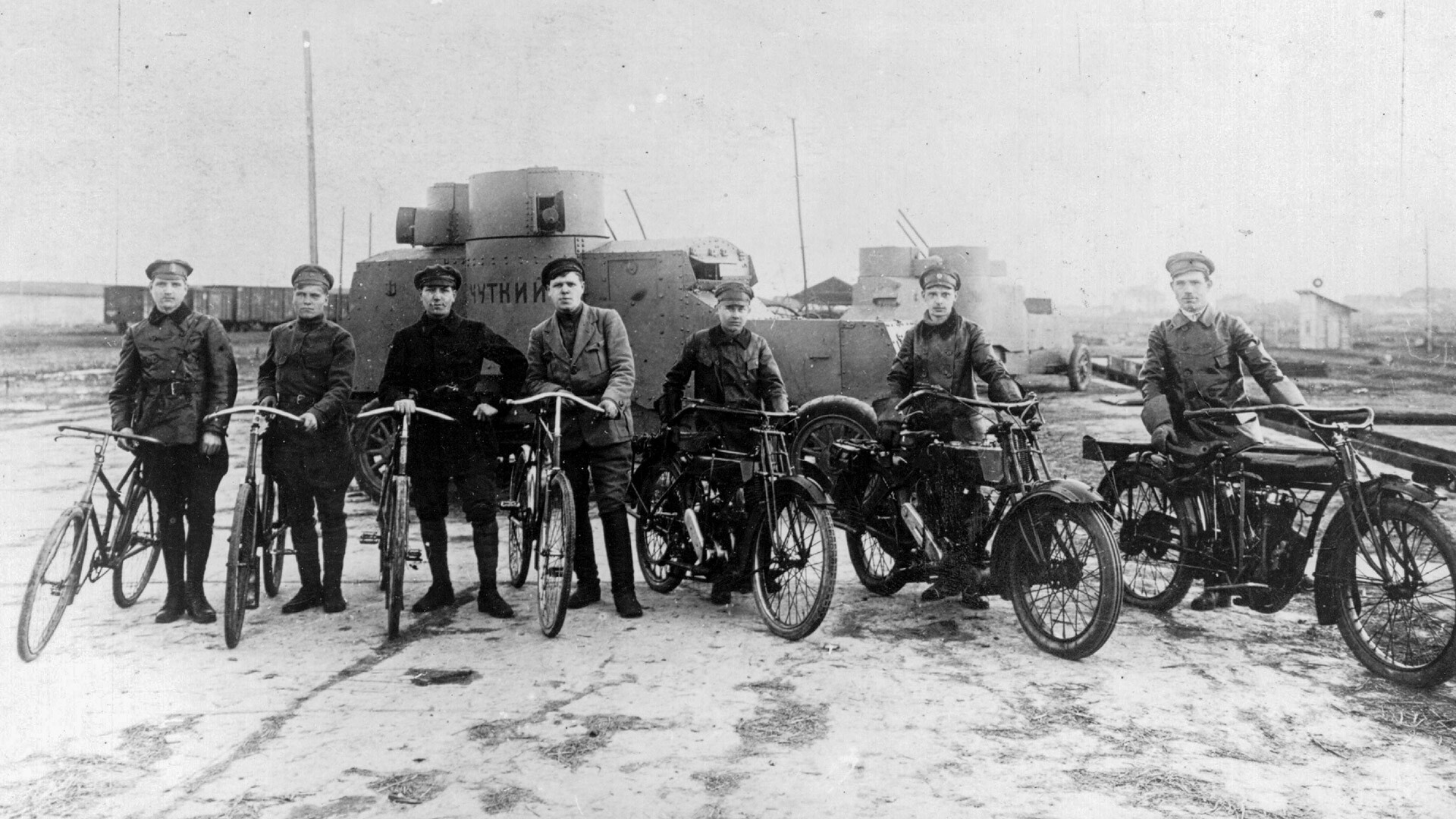 Members of a Boshevik mechanised unit in 1919.

The bicycle infantry even became the heroes of the 1917 Revolution. In November, Moscow saw fighting break out between the supporters and opponents of the new authorities and the reserve bike battalion, which was stationed in the city, sided with the Bolsheviks. Three killed members of the unit were subsequently buried by the Kremlin Wall, while Novoblagoslovennaya Street was renamed Samokatnaya in their honor. 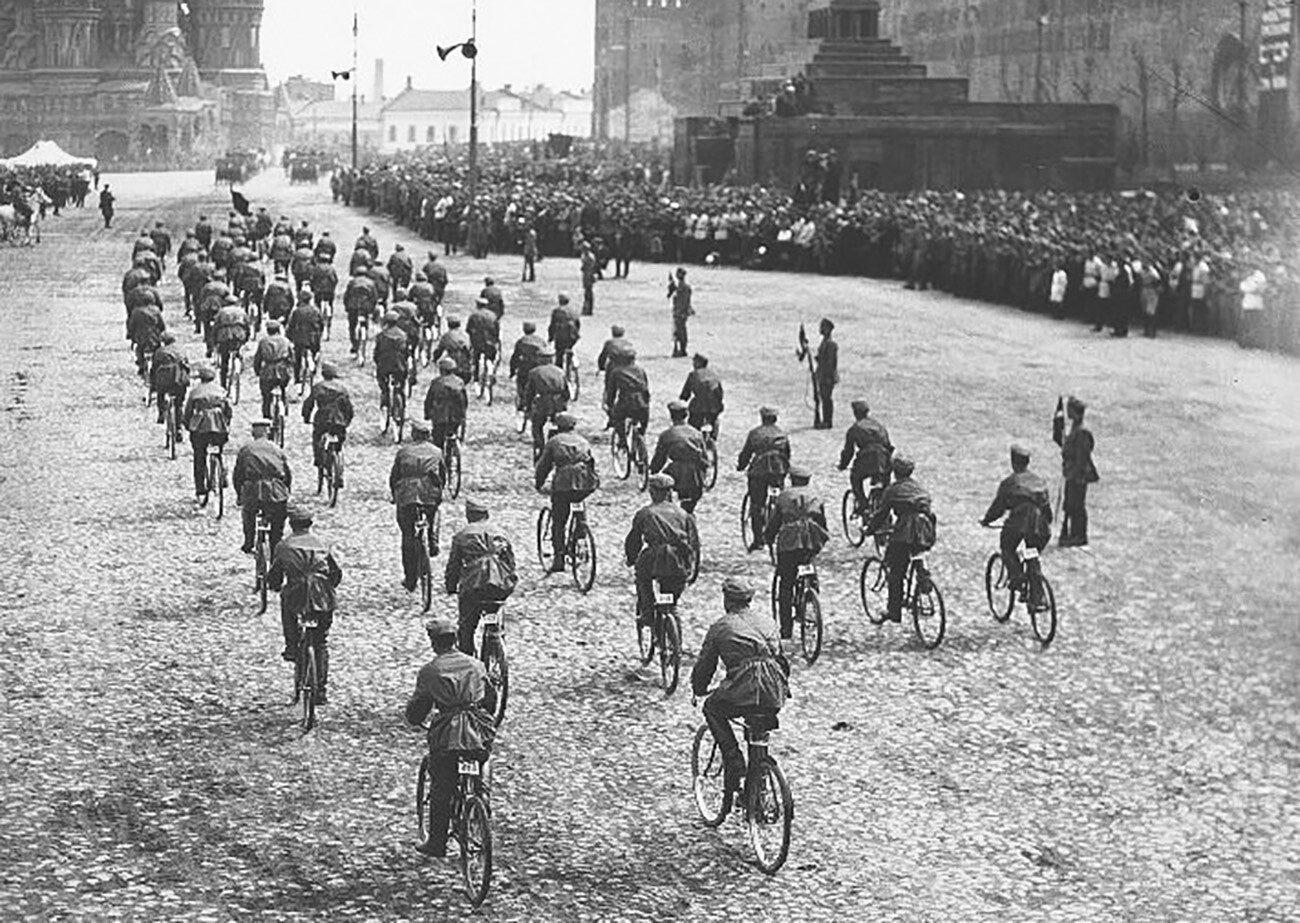 Bicycle troops were widely used during the Civil War in Russia. Vehicles were supplied to the White movement by the Entente, whereas the Bolsheviks mostly seized them from locals. On August 1,1919, they even proclaimed the so-called "bicycle mobilization". 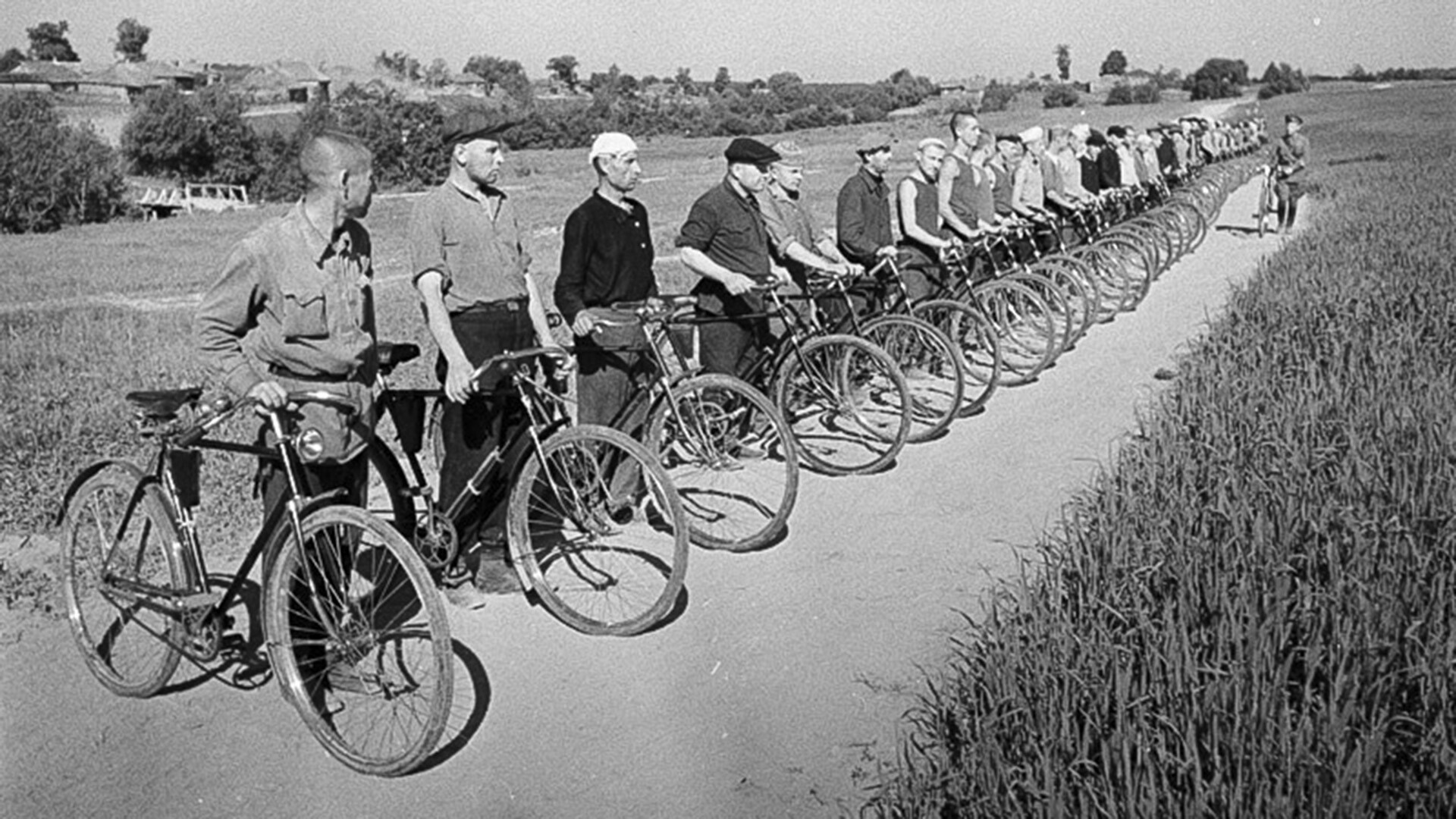 Bicycles didn't enjoy as much popularity in the Red Army during World War II, as in the Wehrmacht or the Finnish armed forces. In the course of the military confrontation, which was a heavy burden for the USSR, the Soviet industry couldn't afford their mass production. So, bicycle supplies largely came to the country as part of war trophies. 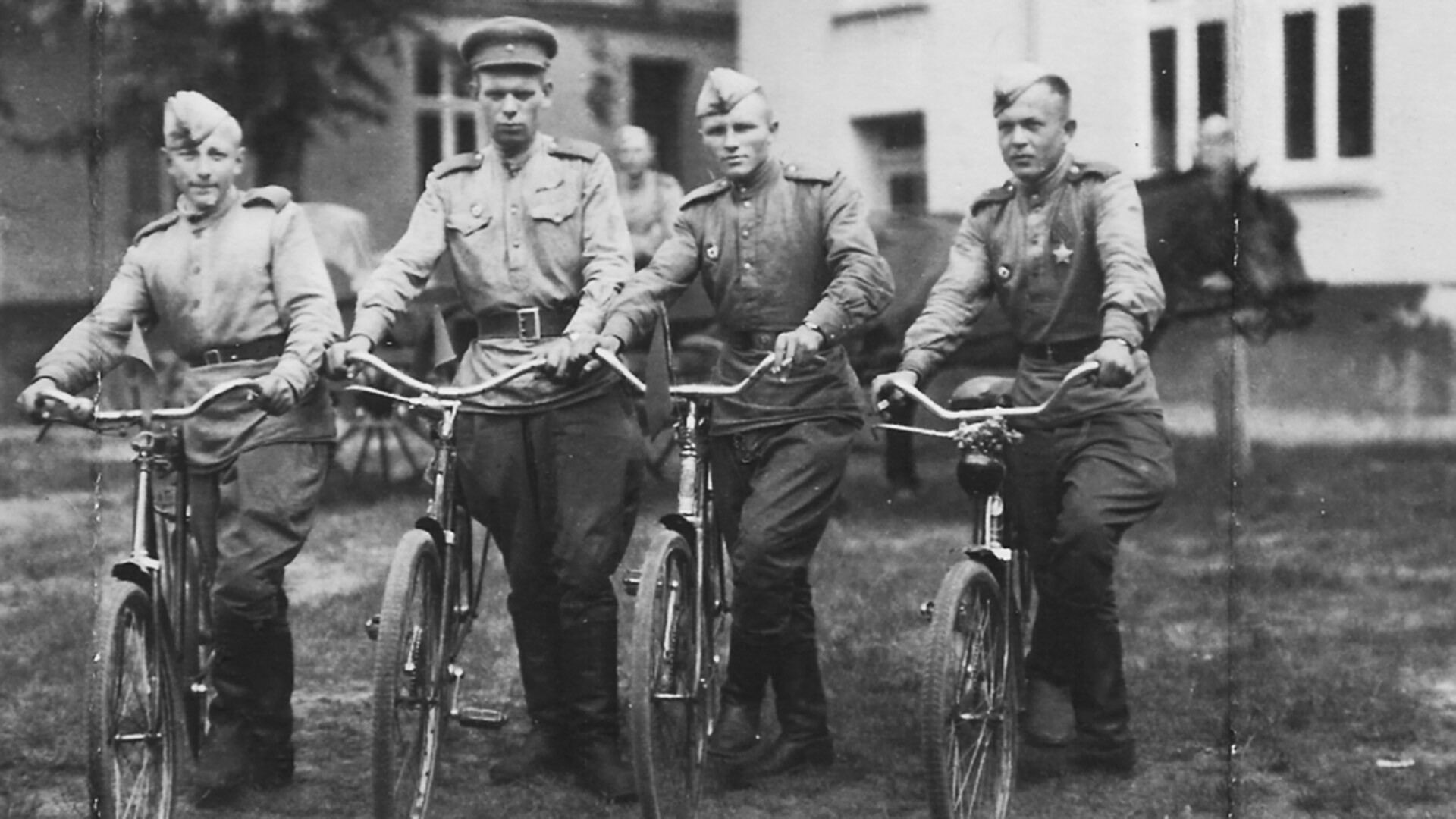 During the mechanized war, few military bicyclists were engaged in warfare. One of the units that took part in combat was the First Bicycle-motorcycle Brigade, which apart from a bicycle unit also included a motorcycle regiment and armored troops. In the summer and fall of 1942, the brigade fought the enemy fiercely in the vicinity of Rzhev. 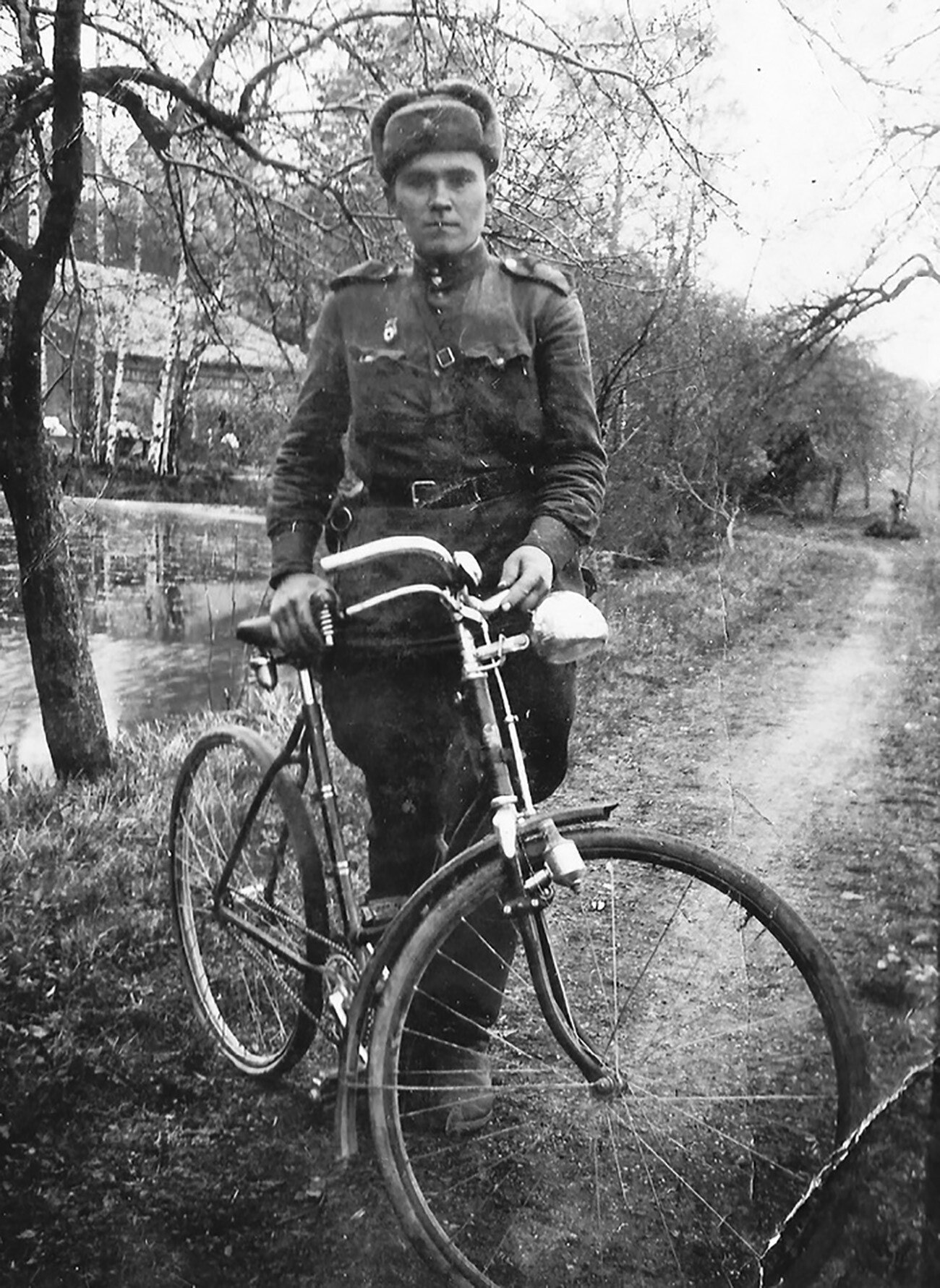 Although during the war, bicyclists could still be engaged in fulfilling special tasks and scouting missions, they mostly served in signal corps. "Most often, we had to 'run' between regiment headquarters and those of divisions," veteran Vladimir Fomin recalled. "Setting out on a new 'raid', we got used to wrapping sealed envelopes and packages with orders and battle reports around a grenade, so that in the case of obvious danger we could set it off and destroy the classified staff documents that we had been entrusted with (yet, it never really went that far)." 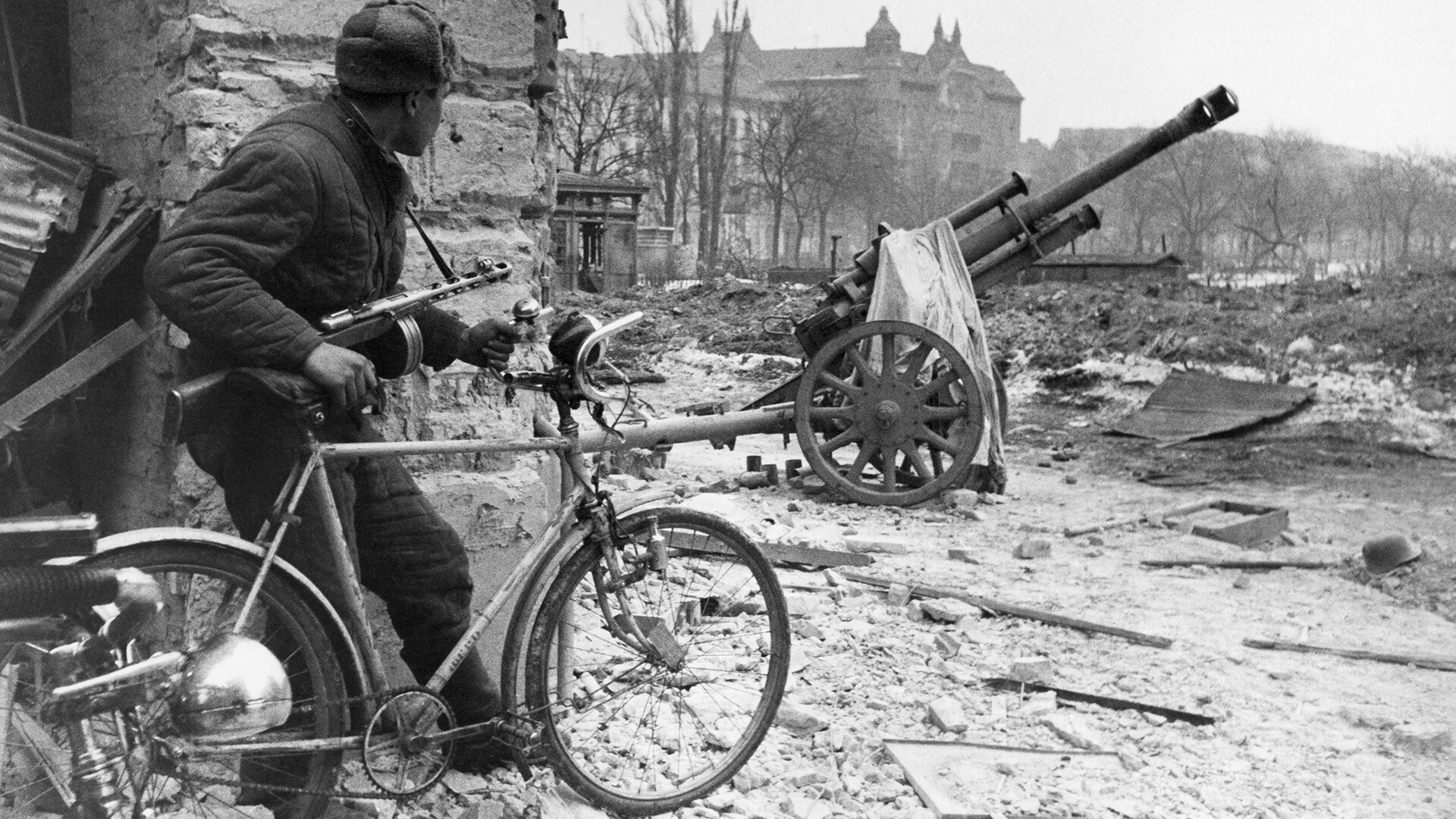 Soviet soldier during the Battle for Budapest.