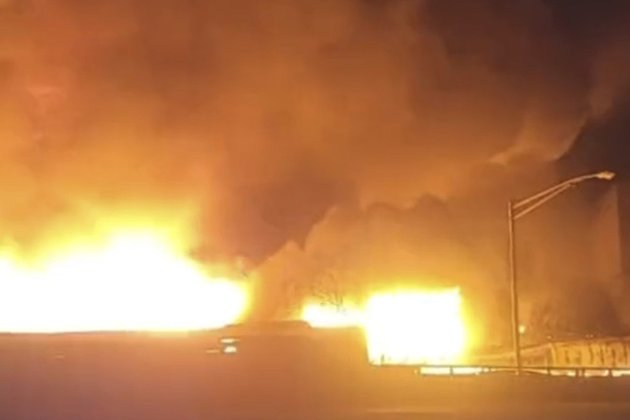 One of the chemical facilities engulfed in flames reportedly produces chlorine

A large fire broke out at a chemical plant in Passaic, New Jersey, with nearby residents urged to stay inside with their windows closed. One of the facilities at the plant reportedly has a major chlorine stockpile.

Despite warnings for local residents to stay inside, a large crowd of people - including young children - could be seen outside observing the flames.

The blaze, which was eventually upgraded to a 10-alarm fire, triggered evacuation of the nearby homes. One of the plant building allegedly collapsed onto itself under the flames. Photos from the scene show its scorched debris lightning up the night skies.

CBS News' Nick Caloway reported, citing Passaic Mayor Hector C. Lora, that as many as 100,000 pounds of dangerous chemical substance - chlorine - were at risk of going up in flames.

On Friday evening, Mayor Lora announced that the firefighters had been able to contain the fire and keep it away from the main structure of the chlorine plant. Before it could be isolated, the blaze had "impacted" some 100,000 pounds of "finished chlorine pellets," local media reported, citing Lora.

Lora also said authorities wouldn't be able to "fully inspect" until the fire is "completely put out" and that it "may take some time to establish" the cause of the blaze.

New Jersey Governor Phil Murphy, in the meantime, urged locals to keep their windows closed and expressed his prayers for "first responders on the scene."

A local weather forecaster claimed that the potentially toxic smoke could be being blown as far as New York's Staten Island, calling on everyone in its path to stay inside.

Chlorine gas can be deadly and was used as a chemical weapon during the First World War. According to the US Centers for Disease Control and Prevention (CDC), symptoms of chlorine exposure can include difficulty breathing, vomiting, blisters, blurred vision, and a burning sensation in the nose, mouth, and eyes.