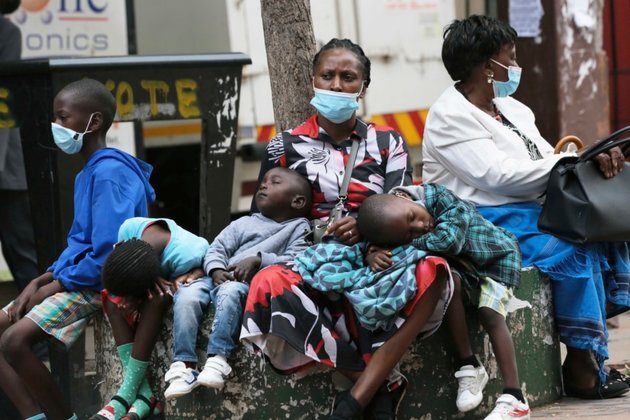 HARARE - Zimbabwe's government says the country is very prepared to handle the new COVID-19 variant - omicron - first reported in neighboring South Africa. The World Health Organization says a fourth wave of the pandemic is most likely to hit Africa.

Zimbabwe's Vice President Constantino Chiwenga - who doubles as the country's health minister - has asked the nation not to be concerned about omicron.

"The country should not panic because we are very prepared. The ramping up of our vaccination program in the past month has seen marked increase in the vaccination uptake. That is the prevention which we are going to have for our people if any other variant comes. At least when your body is protected it is much better than when you are found naked," said the vice president.

Zimbabwe has fully inoculated about 2.8 million people since February, when it began its vaccination program to contain the COVID-19 pandemic. The government has a target of vaccinating at least 10 million Zimbabweans - or 60% of the population - by the end of the year, a figure which might be difficult to reach given the scarcity of resources and short time left.

Itai Rusike, head of the nonprofit Community Working Group on Health, said Zimbabweans should panic about the new variant - initially named B.1.1.529 - since the country shares porous borders with South Africa and Botswana.

"And this new variant is coming at a time when the festive season is upon us. A whole lot of Zimbabweans, they use undesignated entry points. That poses a serious health challenge as they would not be properly screened and monitored as they come back to the country. What we want to encourage the government of Zimbabwe, is for them to strengthen their surveillance and monitoring system especially the land borders and make sure that the screening and monitoring at the entry points is also strengthened," said Rusike. A security guard sanitizes a motorist's hands at the entrance of a health facilty in Harare, Zimbabwe, Nov, 26, 2021.

Meanwhile, Humphrey Karamagi, a medical officer at the World Health Organization Regional Office for Africa, said on the WHO Twitter account that a fourth wave of COVID-19 is likely to hit the continent.

"A fourth wave in Africa is almost a certainty, as long as we have these factors in play, which is new variants coming up and the fact that people can be reinfected. And also, if we are getting new population who may not have been exposed. We would then have subsequent waves. Vaccination helps a lot in terms of reducing the severity of the disease [and] also reducing the risk of infection. The vaccine is not a magic bullet. So the vaccine is to work together with the public health measures to reduce the potential and risks of subsequent waves," said Karamagi.

The WHO says COVID-19 has infected about 6.1 million people in Africa and claimed 152,113 lives. The world health body also says more than 227 million vaccine doses have been administered in Africa.