Biden's America's Back is annoying, but also insulting 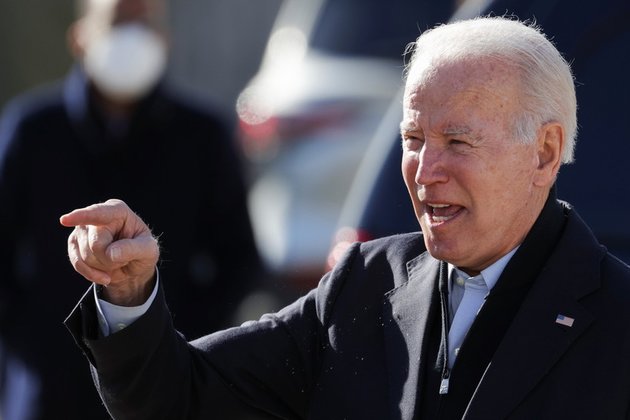 President Joe Biden phoned in to NBC's coverage of the Macy's Thanksgiving Day Parade to declare ?America is back.? Biden's confidence belies his tumbling popularity ratings and the US? economic woes.

President Biden and First Lady Jill Biden phoned in to NBC's Al Roker during the Macy's Thanksgiving Day Parade on Thursday to deliver a holiday message to Americans. "My message is after two years, you're back, America's back," Biden said. "There's nothing we're unable to overcome."

"America is back" is something of a Biden mantra. Biden repeatedly used the phrase following his inauguration to describe his administration's effort to re-engage with international allies and rejoin multilateral agreements like the Paris Climate Accords. The phrase signified a return to liberal globalism after four years of Donald Trump's "America first" approach to foreign policy.

As empty as it sounds abroad, the phrase is downright insulting at home, and there's enough hot air in Biden's words to fill a hundred Macy's parade balloons.

Biden's approval ratings have been in freefall lately, hitting 36% in a recent Quinnipiac University poll. Another poll by Gallup in October showed Biden suffering the steepest decline in approval for a new president since Harry Truman tried to fill the shoes of his deceased predecessor, Franklin Roosevelt, in 1945.

Voters are most concerned with the US' economic situation. Inflation is at its highest level in 31 years, erasing the wage gains touted by Biden as part of his "durable and strong" economic recovery. Drivers traveling for Thanksgiving are paying the highest gas prices since 2012, and a traditional Thanksgiving dinner this year is the most expensive in history, up 14% since last year. Supply chain disruptions persist, and shortages of food and consumer goods have been reported across the country.

Biden will need to solve all of these issues within the next year, as polls currently show the Democratic Party unlikely to keep control of the House and Senate in next year's midterm elections. With Trump seriously considering another run at the White House in 2024, the ex-president is currently beating Biden in five key swing states he lost in 2020. Winning these states would hand Trump the presidency, but other pollsters are even more bullish on Trump. A recent Rasmussen poll shows him beating Biden 45% to 32% in a 2024 rematch.

Sadly, the Biden administration hasn't offered any real solutions to ease the public's economic anxieties, which, while triggered by the Covid-19 pandemic, are partly of the administration's own making.

One of Biden's first actions upon inauguration was signing an executive order shutting down the Keystone XL pipeline, which would have transported 900,000 barrels of oil per day from Canada. Biden then suspended oil and gas drilling licenses in Alaska, and now, with prices soaring, has turned to begging the OPEC countries to increase production, which they have shown zero intention of doing. With the US' energy independence down the tubes, all the Biden administration can do is laugh, literally.

Asked what the administration would do to lower gas prices, Energy Secretary Jennifer Granholm laughed out loud to Bloomberg host Tom Keene this month. "That's hilarious," Granholm chuckled, saying that she had no "magic wand" with which to fix the problem. In the days that followed, Granholm pivoted to describing the gas crunch as a good thing, and an opportunity to "get off oil and gas" and onto green energy.

The Biden administration has adopted the same "deal with it" attitude when confronted with the consequences of almost all of its failures. Asked to explain why food and gasoline costs more than ever before, Vice President Kamala Harris could only respond "the bread costs more, the gas costs more...we take this seriously."

At least Harris actually addressed the issue at hand. Down at the US' southern border, where more illegal immigrants crossed into America this year than during 2020 and 2019 combined, Harris - who has been tasked with resolving the crisis - has paid only a flying visit to the frontier, and the Biden administration has fought tooth and nail to end Trump-era policies that would actually lower the number of crossings.

Likewise with the problem of empty shelves and supply chain disruptions, the Biden administration has not promised any relief. Instead, Biden's pushing potentially ruinous vaccine mandates on truckers, while his deputy Treasury Secretary tells the public that shelves will stay empty until "everyone in America and everyone around the world gets vaccinated" and his Press Secretary sneers at "the tragedy of the treadmill that's delayed."

Meanwhile, Transportation Secretary Pete Buttigieg spun things a different way, telling Americans that shortages are good, actually. "Demand is up because income is up because the president has successfully guided this economy out of the teeth of a terrifying recession," he claimed last month, channeling his inner 'Baghdad Bob.'

Such blatant gaslighting can only go so far in covering up the fact that for many Americans, life has gotten objectively worse under the Biden administration. The administration's response to slipping living standards - which seems to alternate between ignoring these mammoth issues and actively fuelling them - also explains why, to the public, "America's back" is a phrase that's not just empty, but insulting.