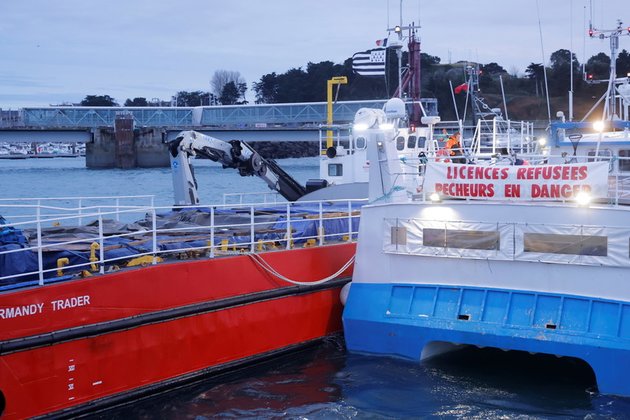 French fishermen have blocked British vessels from accessing the ports of St. Malo and Calais in a protest over UK authorities ?withholding? their licenses.

Boats decorated with posters calling on the UK to change its policy blocked the entrance to the two French ports on Friday morning, while other blockages took place later in the day.

The protesters are also preventing British trucks from entering through the Eurotunnel Freight Terminal.

"We don't want handouts, we just want our licenses back," the president of France's National Committee of Fishermen, Jean Luc Hall, explained at a press conference announcing the forthcoming action on Thursday.

The committee said fishermen would temporarily block the arrival of ferries in a few important terminals such as St. Malo, Ouistreham and Calais, as well trucks at the Channel Tunnel freight terminal for "a few hours."

"Our coordinated action is intended to show that we have an ability to block ports, block the Channel Tunnel, and therefore cripple the UK economy," Hall said.

According to one of the fishermen quoted by The Independent, around 150 French boats are still waiting for their licenses for fishing in British waters to be granted. He confessed that fishermen felt "humiliated" by becoming "hostages to politics."

A Downing Street spokesperson expressed the UK government's disappointment over the protests, as well as hope that French authorities would ensure "the free flow of traffic and trade to ensure the trade is not disrupted."

Current tensions between the UK and France have been prompted by French fishermen's claims that the UK is withholding a significant number of licenses in violation of post-Brexit agreements. Britain denies the claims and is insisting that fishermen provide proper quota data to obtain licenses.

LONDON, England: Official figures have been released indicating that in the year to June, the UK recorded its highest increase ...