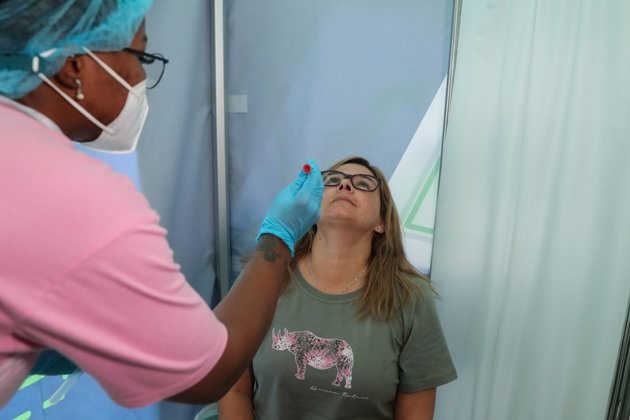 NAIROBI - Kenya has not banned travel to southern Africa but its Ministry of Health says it will carefully screen people arriving from South Africa, Botswana, and Hong Kong for the new COVID variant discovered in South Africa.

The Kenyan government directs passengers arriving from southern African countries to take the COVID test before being allowed into the country.

South Africa and Botswana have reported a new variant in their countries that scientists say is highly transmittable and vaccine resistant.

Kenya's Director General for Health Patrick Amoth told VOA his country is on high alert to combat the new variant.

'We are working to ensure that our surveillance system is top-notch and looking specifically at people coming from South Africa, Botswana and Hong Kong to put them through a robust surveillance system,' said Amoth. 'We insist on having you fully vaccinated before you come to the country. And you also need to have a negative PCR test taken 96 hours before your arrival in the country."

This week, Kenyan President Uhuru Kenyatta traveled to South Africa, where he signed deals to boost trade and economic cooperation between the two countries,

To combat the spread of the virus in the population, the East African nation launched a ten-day mass vaccination campaign Friday. Kenya has vaccinated at least 6.5 million people.

Amoth says they have enough vaccines to inoculate even more.

'It's part of the ongoing vaccination process and we wanted to scale up in view of the events that are happening in Europe and the rest of the world,' said Amoth. 'So to ensure we reach herd immunity and the entire population is protected and now we have more vaccines available we thought to be able to scale up so that we can be able to reach more people."

Amoth expressed confidence that more Kenyans will get vaccinated.

'For example, yesterday we vaccinated close to 111,000 people from the previous daily rate of about 50,000-60,000,' said Amoth. 'So Kenyans are enthusiastic to be able to take the vaccine and also now this emerging information we believe will sway the public opinion towards going for the vaccine instead of vaccine hesitancy."

Kenya has a policy of not providing government services to unvaccinated people as a way of encouraging them to get inoculated.

Kenya hopes to vaccinate 10 million people by the end of the year.