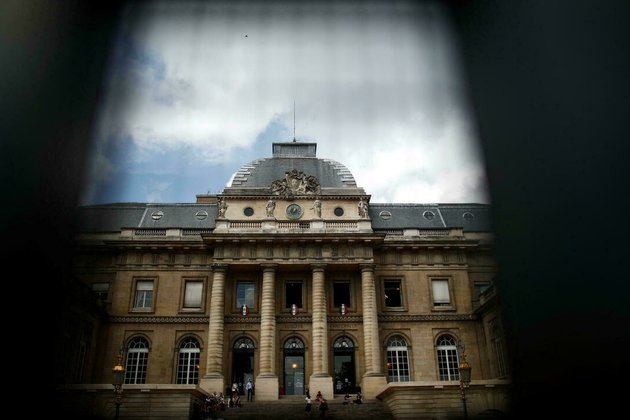 Tuesday's session of the special criminal court, where 20 men are being tried for their alleged involvement in the November 2015 Paris terrorist killings, examined the cases of Adel Haddadi and Muhammed Usman. Both were arrested in Austria one month after the attacks in the French capital. They are suspected of having planned a terrorist action in France.

This was another day of police evidence from anonymous and invisible officers with metallic disguised voices.

Usman was born in Pakistan, into a strict Muslim family. There is a ten-year hole in his CV, between 2004 and 2014. The Pakistani authorities have told the French that he spent those years in a madrasa or koranic school, and that he also learned bomb-making. The Pakistan police say that Usman was a member of the Taliban, a claim which the accused has always denied.

He made his own way to the Syrian war zone, a journey of more than 1,000 kilometres from his home in the Punjab, but claims he never had any ambition of fighting for Islamic State.

Haddadi is Algerian. He made his own way to Syria too, also without any wish to become an IS combatant.

Both men deny having undergone any military training.

Usman told investigators that he had found a proper, pure Islam in Syria. He approved of the strict application of Sharia law.

Haddadi says he worked as a cook, having left Algeria because he disliked his neighbours. He denies any religious or activist motivation.

Usman and Haddadi were recruited for a suicide mission in France. Usman says he refused; Haddadi knew that he was "going to do something wrong," but that it "was a mission for Allah, for the good of God".

They left Syria together, along with the two Iraqis who later died in the suicide attacks at the Stade de France on 13 November 2015. The four, all carrying false Syrian passports, separated in Greece, with Usman and Haddadi being arrested and imprisoned for possession of false documents.

They were finally released in late October 2015. On the day of the Paris attacks, the pair were in Croatia, heading westwards. They never got further than Austria, where they were once again arrested.

'We're waiting for the right moment'

A second police investigator, testifying under the same conditions of anonymity as his colleague, detailed the telephone activity of the two men.

While the pair were attempting to cross Europe, Adel Haddadi sent an encrypted message to Oussama Atar, one of the masterminds of the November attacks, saying "we are waiting for the right moment".

Muhammed Usman seems to have spent a lot of time on internet pornography sites.

There are several dark areas in the police evidence against the two men. But both will clearly have serious questions to answer when the time comes for them to testify in person next January.

SINGAPORE: Three months after Cambodia rolled out COVID-19 vaccines, just 11 percent of its population had received at least one ...

El Salvador plans to locate Bitcoin city at base of volcano

SAN SALVADOR, El Salvador: El Salvador President Nayib Bukele has announced plans to build a Bitcoin city at the base ...

US announces that 95% of federal workers vaccinated

WASHINGTON D.C.: Some 95 percent of U.S. federal workers have received at least one dose of a COVID-19 vaccine, or ...

Of 32 scholarships, 22 awarded to US women as Rhodes scholars for 2022

OXFORD, England: The Rhodes Trust has announced the 2022 class of U.S. Rhodes scholars, which includes the largest number of ...

NEW DELHI, India: India will introduce a bill during the winter session of Parliament that could block the use of ...

PARIS, France: In protesting the UK's refusal to grant more licenses to fish in British waters, French fishermen said this ...

WASHINGTON D.C.: To encourage a drop in sky-high gasoline prices, President Biden said the Department of Energy will release 50 ...

Vonage sells to Ericsson for $6.2 billon in merger of tech giants

DUBAI, UAE: Israel and Jordan have signed what is being labeled a most significant cooperation agreement to construct a major ...