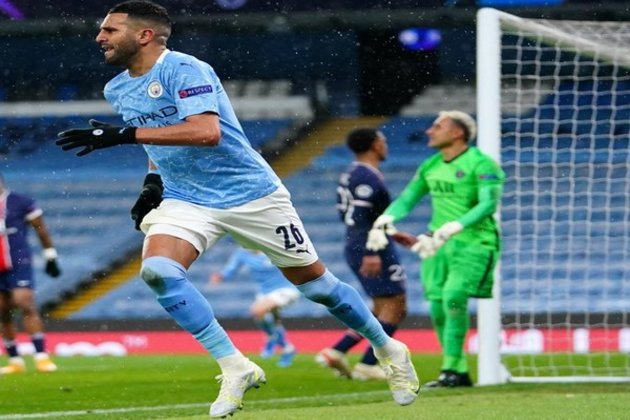 Manchester [UK], May 5 (ANI): Riyad Mahrez was the star on show as Manchester City managed to progress to the final of the Champions League for the first time in their history after defeating Paris Saint-Germain (PSG) in the second-leg semi-final on Tuesday (local time) here at the Etihad Stadium. In the second-leg semi-final, City outclassed PSG 2-0 and as a result, they won the fixture 4-1 on aggregate. In the first-leg semi-final between both these sides, Manchester City had emerged triumphant after defeating PSG 2-1. The first half got off to an edgy start as both teams looked nervous. In the initial few minutes, PSG threatened to score a goal and in the eighth minute, it seemed that PSG got a penalty as the on-field official gave the verdict, but looking at replays, it was clearly evident that there was no case of handball and hence VAR overruled the decision. In the 11th minute, Manchester City took the lead as Riyad Mahrez scored the goal, giving the hosts a 1-0 lead in the second leg, and increasing the overall aggregate to 3-1. After conceding the goals, PSG went into overdrive and in the 22nd minute, their player Ander Herrera was also given a yellow card after being over-aggressive with the on-field official. Both teams toiled hard, but no more goals were possible in the first half, and as a result, Manchester City held on to its 1-0 lead at halftime. In the second half, PSG had to do the bulk of the work, but Manchester City managed to hold them off. In the 63rd minute, Mahrez registered the second goal of the match and this proved to be the final nail in the coffin for PSG. In the 69th minute, Mauricio Pochettino's PSG was given another blow as Angel Di Maria was given a red card as the Argentine player had a tussle with City over a throw. Fernandinho had cheekily nudged the ball away and in response, Di Maria flashed a kick at the Brazilian and this resulted in him being sent off. In the end, no more goals were scored and City walked away with a victory. Manchester City will now face the winners of the Chelsea and Real Madrid semi-final later on Wednesday. The first-leg semi-final between Real Madrid and Chelsea had ended in a 1-1 draw. (ANI)