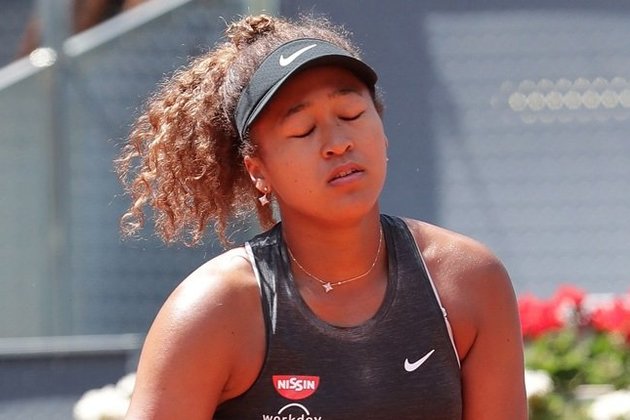 Naomi Osaka said she has a better plan for coping with clay after she suffered a second-round exit at the Madrid Open on Sunday, the Japanese second seed losing 6-4, 3-6, 6-1 to Karolina Muchova.

Osaka, the reigning US and Australian Open champion, has seven career hard-court titles, but has never managed to lift a clay-court trophy.

Playing her first clay-court event since the 2019 French Open, Osaka beat compatriot Misaki Doi in the first round, but she came unstuck against an opponent making her top 20 debut this week.

"I have a pretty positive outlook on it," said Osaka after the match. "I can control my attitude and how hard I fought and for me, I thought I did that really well.

"Physically I don't think I got tired. I just made some pretty bad decisions point-wise in really crucial moments.

"So I think I'll learn from that, and hopefully - I don't really want to play her on clay anymore - but maybe next time we play, I'll make better decisions.

"I'm really happy with how I was able to talk with my team after I lost and after I came off the court. I think we really have a plan now, so I think it's good."

Osaka is bidding to win a third consecutive major title at the French Open next month but has never previously made it past the third round in Paris.

"These tournaments are called warm-up tournaments and of course we all come here to win and do well at these tournaments too, but I would prefer to peak at the French as opposed to winning this tournament and then kind of going downhill," Osaka said.

Muchova beat three top 20 players, including world number one Ashleigh Barty, en route to the Australian Open semi-finals earlier this year and she can now add world number two Osaka to her growing list of scalps.

"I was trying to move her as much as possible," Muchova said. "That was the tactic. It sounds easy but she's playing really fast so it's not that easy on the court.

"In the second set especially, she started to be very aggressive. I got back to what I did in the first set in the third set, and again, tried to move her left, right, dropshots, but still in a fast way."

Muchova used a single break of serve to claim the opening set before Osaka, a quarter-finalist at Madrid two years ago, fell 3-1 behind in the second but rallied to win the next five games and force a decider.

Muchova regrouped and broke Osaka early in the third set, and then again for a 5-1 lead, before sealing victory in just under two hours.

Fifth seed Aryna Sabalenka also made it through to the last 16 with a 6-3, 6-3 win over Daria Kasatkina.