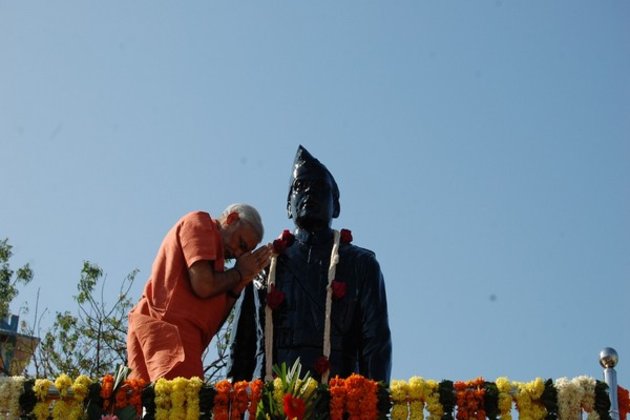 New Delhi [India], January 22 (ANI): Ahead of his address at the inaugural function of the 'Parakram Diwas' celebrations at Victoria Memorial in Kolkata, Prime Minister Narendra Modi on Friday paid tribute to Netaji Subhas Chandra Bose on the eve of freedom fighter's Jayanti.

He posted throwback pictures of his 2009 visit to Gujarat's Haripura, where Subhas Chandra Bose was unanimously elected the president of the Indian National Congress during a Congress session.

This comes a day ahead of a scheduled visit to Kolkata, West Bengal.

Tomorrow will be 125th birth anniversary year of Netaji Subhas Chandra Bose. In order to honour and remember Netaji's indomitable spirit and selfless service to the nation, Government of India has decided to celebrate his birthday on January 23 every year as 'Parakram Diwas' to inspire people of the country, especially the youth, to act with fortitude in the face of adversity as Netaji did, and to infuse in them a spirit of patriotic fervour.

The Prime Minister will preside over the inaugural function of the 'Parakram Diwas' celebrations at Victoria Memorial in Kolkata.

According to a Prime Minister's Office (PMO) release, a permanent exhibition and a projection mapping show on Netaji will be inaugurated on the occasion.

"A commemorative coin and postage stamp will also be released by the Prime Minister. A cultural programme "Amra Nuton Jouboneri Doot", based on the theme of Netaji, will also be held," PMO said.

"Before this event, Prime Minister will visit the National Library, Kolkata, where an International Conference "Re-visiting the legacy of Netaji Subhas in the 21st century" and an Artists' Camp are being organized. Prime Minister will interact with the artists and conference participants," it said.

In a series of tweets, PM Modi on Friday paid his tributes to the freedom fighter.

He said "Tomorrow, India will mark ParakramDivas, the Jayanti of the great Netaji Subhas Chandra Bose. Among the various programmes being organised across the nation, one special programme is being held at Haripura in Gujarat. Do join the programme, which begins at 1 PM.""Haripura has a special relation with Netaji Subhas Chandra Bose. It was at the historic Haripura Session of 1938 that Netaji Bose took up the Presidentship of the Congress Party. Tomorrow's programme at Haripura will be a tribute to Netaji Bose's contribution to our nation," he added.

PM Modi said, "On the eve of Netaji Bose's Jayanti, my mind goes back to 23rd January 2009- the day we launched e-Gram Vishwagram Project from Haripura. This initiative revolutionised Gujarat's IT infrastructure and took the fruits of technology to the poor, in the remotest parts of the state."Prime Minister Modi attached throwback pictures of his visit to Haripura as the chief minister of Gujarat and recalled the occasion in 2009 when the Gujarat government had launched the e-Gram Vishwagram Project from Haripura on Subhas Chandra Bose's birth anniversary.

"I can never forget the affection of the people of Haripura, who took me through an elaborate procession on the same road as Netaji Bose was taken, in 1938. His procession included a decorated chariot drawn by 51 bullocks. I also visited the place where Netaji stayed in Haripura," he tweeted.

Prime Minister Modi in another tweet said, "May the thoughts and ideals of Netaji Subhas Chandra Bose keep inspiring us to work towards building an India that he would be proud of...a strong, confident and self-reliant India, whose human-centric approach contributes to a better planet in the years to come." (ANI)