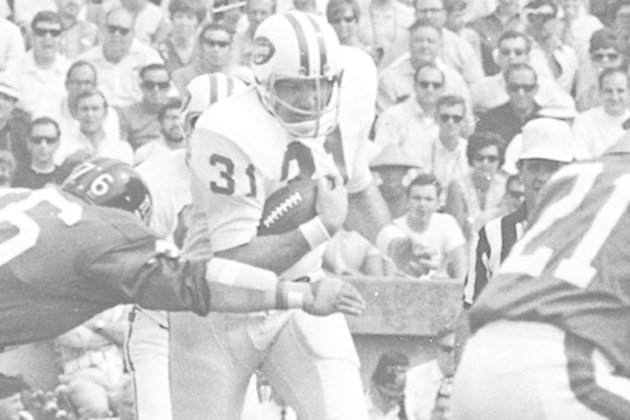 Bill Mathis, the talented, versatile, nails-tough running back whose pro football career spanned the decade of the Sixties from the birth of the Titans of New York through Super Bowl III and the Jets' two AFL division titles, has died. He was 81 years old.

Frank Ramos, the Jets' longtime public relations director who does yeoman's duty in helping us assemble our in memoriam stories of members of the Jets family who've left us over the years, put it aptly upon hearing the news of Mathis' passing: "We knew this day was coming, but it's still tough to take."

And from RB/DB/KR Earl Christy, Mathis' teammate on the '66-68 Jets, there was this heartfelt photo caption on Earl's Facebook page:

"Had to share this photo today of Joe handing off to running back Bill Mathis. Thank you for the memories. Rest well, Bill, my teammate, my friend ... May God bless your family during this time."

Mathis suffered from documented physical and cognitive issues in his later years but he fought the good fight away from the field, just as he did while he was on it.

He was a college star at Clemson - ACC Back of the Year, Tigers MVP, participant in the Sugar and Bluebonnet bowls, Blue-Gray Game and Senior Bowl - who took a while to get to the Jets. His rights were held in the 1960 AFL Draft by Denver and the '60 NFL Draft by San Francisco (both drafts were held in November 1959) and then by Houston until the Oilers traded him to the New York Titans before the first weekend of American Football League games.

From there, Mathis never left the Titans/Jets franchise. He played in the first game in Titans history, the 27-3 win over the Buffalo Bills at the Polo Grounds. And then, except for a knee injury that kept him out of several games in 1962, he played in every other game for the Titans and Jets, a total of 140 of 143 games, 91 of them starts.

And in those games, Mathis showed the strength of his versatility. He began as the Titans' featured back and produced his best statistical season in 1961 with 202 rushes to lead the AFL, 846 yards to finish second in the league (4.2 yards/carry) and seven touchdowns. He was named the first Team MVP in franchise history for his '61 season, was voted to the first of his two AFL All-Star Game berths, and was a consensus All-AFL first-team selection.

And all that after breaking his collarbone in Game 3 but not missing any action.

The Titans morphed into the Jets in 1963, Weeb Ewbank came aboard as the coach, RBs Matt Snell and Emerson Boozer arrived soon after, and Mathis' offensive role - but not his importance to the operation - changed.

His carries dropped but he still played in every game and his pass-blocking and especially his pass-catching thrived. From 1965-69 he averaged fewer than 100 carries a season but totaled 91 catches, most on throws from Joe Namath, for 1,382 yards - an astounding, for a back, 15.2 yards/catch. His career-long 70-yard TD reception came in the 1966 tie game at Oakland, a year after he recorded his career-long 79-yard against the Oilers at Shea Stadium.

Mathis and Namath grew closer off the field, too, as Ewbank had the two rooming together on the road. The coach's instructions to Mathis: Keep Namath out of trouble.

"That was tough," Mathis was reported to have said of that task.

Then came the Super Bowl and Mathis played his supporting role, especially in blocking for Snell and Boozer and in catching three passes out of the backfield for 20 yards, two of the catches helping move two of the Jets' scoring drives in their epic 16-7 win over the Colts.

Mathis had determined that it was time for him to retire after winning his ring, but Ewbank had other ideas, asking him to unretire and play one more season. Mathis agreed. One of his first assignments: Serve along with two more of the Jets' three original Titans, Don Maynard and Larry Grantham, as co-captains for the '69 preseason, and in particular for the Jets' first summer meeting with the Giants at Yale Bowl.

"I know we were playing for the bragging rights of Manhattan," said Mathis, who scored two touchdowns in the Jets' 37-14 win. "The Giants had great teams in the past. We just had a better team than they did. They weren't ready for us."

Mathis finally retired after the '69 season, earning multiple distinctions of being one of being one of four Titans who won the Super Bowl as Jets, one of 20 players who played in the AFL for its entire 10-year existence, and one of seven who did their 10 years in the AFL all with one franchise.

But he didn't leave New York right away. Ramos described him as "a real Southern gentleman, a very smart businessman, with a very good sense of humor, who had a long career on Wall Street and as a philanthropist."

Regarding his good deeds, Ramos described how Mathis would represent the Jets for two decades at the annual Super Bowl Taste of the NFL event, and when it came time for the night's "silent auctions," so many of the big tickets were gone, having been bought up quietly by Mathis and given away to friends.

As for the sense of humor, Mathis would roar with laughter as he retold the story of how his Clemson head coach, Frank Howard, would razz him about the weight he'd gained some 30 years after his playing days.

"Billy, tell me, do you have any eligibility left?" Howard said.

"No, Coach, I used that up a long time ago," Mathis replied.

"Oh, I thought you might come back to play guard for us," the coach said.

But Howard knew greatness when he saw it and coached it. In 1995, when Mathis was selected to his third Hall of Fame, the Georgia Sports HOF, to go with his plaques in the South Carolina and Clemson halls, Howard said:

"Bill Mathis was one of these rare players who got better every time he put that uniform on. And that included his pro playing days. They don't make them any finer."

At least 110 people are feared dead in a weekend attack on farmers in the northeast part of Nigeria blamed ...

GHAZNI, Afghanistan - At least 31 people were killed in a suicide bomb attack in Afghanistan's Ghazni province on Sunday, ...

MANILA, Philippines - The Philippines, an old American ally in Asia, is changing its view on whether to scrap a ...

Azerbaijani Opposition Activist Gets One Year In Prison 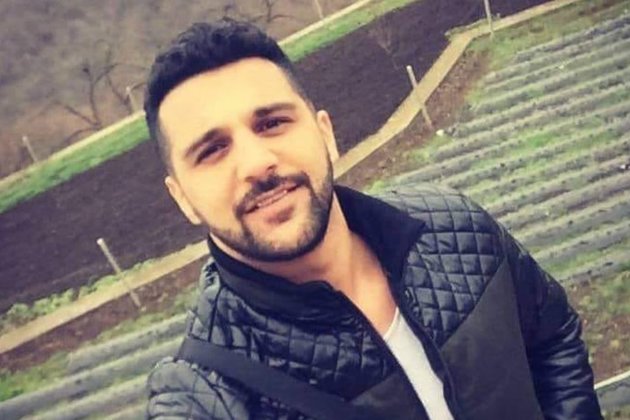 BAKU -- A member of the opposition Azerbaijan Popular Front Party (AXCP), Mahammad Imanli, has been sentenced to one year ... 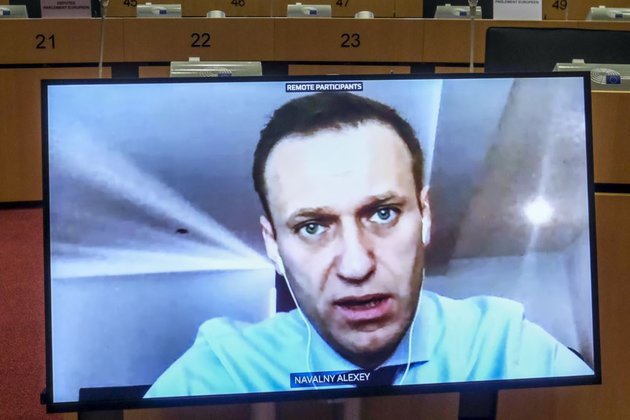 Russia's Investigative Committee has rejected reports saying a probe has been launched into opposition politician Aleksei Navalny's interview with the ... 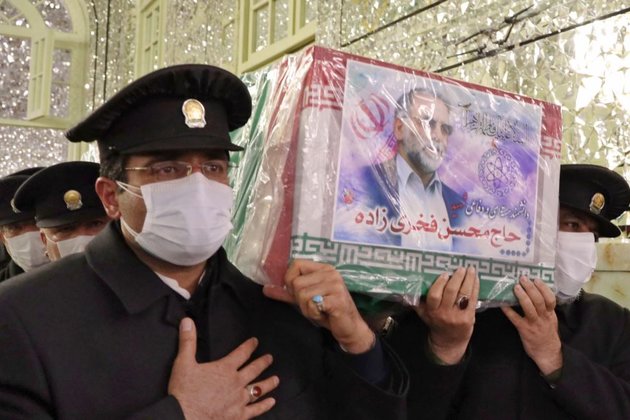 Iranian lawmakers have approved a bill to suspend United Nations inspections of the country's nuclear facilities and boost its uranium ...

SYDNEY, NSW, Australia - Stocks in Asia bounced back on Tuesday, a day after stocks across the world tumbled.Good gains ...

NEW YORK, New York - Wall Street tacked on to a global rout in stocks on Tuesday as investors came ...

Washington [US], November 30 (ANI): US President-elect Joe Biden on Monday announced key members of his economic team, including an ...

SYDNEY, NSW, Australia - Markets in Asia were active Monday with sellers out in force.Most stock markets were in the ...