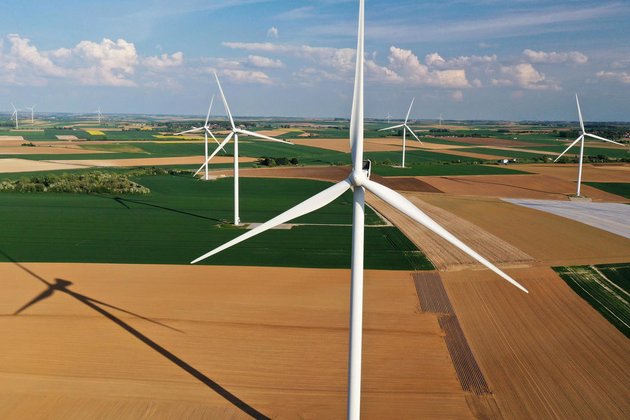 Energy sources such as wind and solar produced a record 10% of global electricity in the first half of 2020, while coal fell 8.3%, new analysis shows. Experts say however that this shift in consumption, accelerated by the Covid-19 pandemic, is not enough to limit climate change in the long term.

Renewables accounted for 1,129 terawatt-hours in January-June, compared with 992 in the first six months of 2019, a 14 percent increase, according to a report by the independent Ember energy think tank, based in the UK.

Electricity generated from coal -- the most polluting fossil fuel -- fell 8.3% in the first half of 2020.

"This breaks a new record, following on from a year-on-year fall of 3% in 2019, which at the time was the biggest fall since at least 1990," the report said.

"For the first time, the world's coal fleet ran at less than half of its capacity this year."

Dave Jones, senior electricity analyst at Ember said that while 30% of coal's decline this year could be attributed to increased wind and solar generation, the rest was likely due to the economic slowdown caused by Covid-19.

He also points to mild winters in many countries which meant electricity demand for heating was lower.

It showed that many major economies -- including China, the United States, India, Japan, Brazil and Turkey -- now generate at least 10% of their electricity through wind and solar.

Britain and the European Union generated 21% and 33% of their power from renewables, respectively.

Star performer Germany rose to 42%, while on the other end of the scale; Russia generated just 0.2% of its electricity from wind and solar.

Overall, the percentage of power drawn from wind and solar has more than doubled from 4.6% in 2015 -- the year of the landmark Paris deal on climate change.

Wind and solar generated almost as much CO2-free power as nuclear power plants, which generated 10.5% of global electricity in the first half of 2020, a figure unchanged from 2019.

"From 2015 it's an incredible amount of growth (in solar and wind), but even at 10% it's not completely transformational," Dave Jones told AFP.

The key is to look at how quickly the emissions are falling, and he points out that it's not fast enough.

Ember says that government stimulus packages will need to be forthcoming to keep up the momentum in renewables, especially after the slowdown during the pandemic.

"We have the solution, it's working, it's just not happening fast enough."

The accord also aims for a cap of at least 1.5C of global warming.

To reach this, the United Nations says emissions must fall 7.6% annually this decade.

The Intergovernmental Panel on Climate Change says that coal use needs to fall 13% every year this decade to keep the 1.5C objective.

China, the world's leading polluter, reduced its coal production just two percent so far this year despite its economic slowdown caused by the pandemic, but it is far from planning to give it up.

United States considering walking away from embassy in Baghdad

BAGHDAD, Iraq - The United States is threatening to close its embassy in Baghdad amid frustrations over attacks by Shi'ite ...

Trump wants Biden to be tested for drugs prior to debate

Saturday is International Day for Total Elimination of Nuclear Weapons

NEW YORK, New York - On the International Day for the Total Elimination of Nuclear Weapons marked on Saturday, the ...

WASHINGTON, DC - More than 300 demonstrators across the United States are facing charges related to the various protests that ...

Fifth most visited city in world prepares for long Winter

SINGAPORE - These days, the desolate streets and shuttered businesses in popular tourist areas in Singapore like Little India and ...

SYDNEY, NSW, Australia - Stocks in Japan and Hong Kong rose strongly on Monday, while in China and Australia stock ...

BRUSSELS, Belgium - Last week, the President of the European Commission Ursula von der Leyen made an ambitious proposal. By ...