Zverev loses racquet into crowd on way to Shanghai last 16 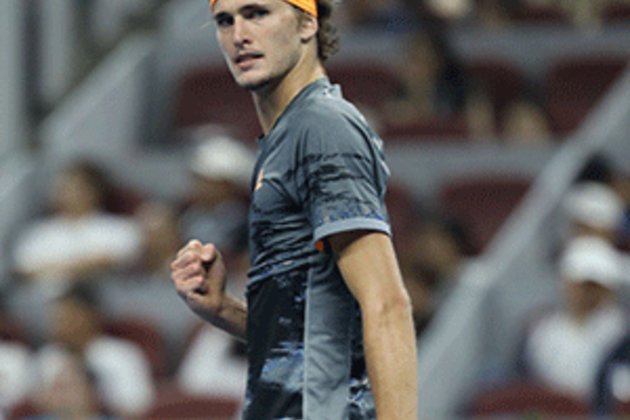 Shanghai - Alexander Zverev smashed and seethed into the last 16 of the Shanghai Masters on Wednesday with a dragged-out 7-6 (15/13), 7-6 (7/3) win over French underdog Jeremy Chardy.

An incident-packed match saw Zverev apologise to a television cameraman after the young German accidentally hit a ball square into his jaw in winning a point.

The 22-year-old was also seen by a doctor in the first set and in another colourful moment Zverev smashed his racquet on the floor during the mammoth first-set tie-break.

Zverev, ranked sixth in the world but suffering a poor season, was pushed all the way by the 71st-ranked Chardy before finally emerging in one hour and 48 minutes.

The second-set tie-break also had a lighter moment - Zverev losing his grip while hitting a shot, and his racquet flying into the crowd.

Zverev has long been talked about as the next big thing in men's tennis, but only one of his 11 career titles has come this year. He is yet to win a Grand Slam.

The fifth seed will play Andrey Rublev of Russia next.

WASHINGTON, DC - High profile lawyers Alan Dershowitz and Ken Starr have been brought in to work with the legal ...

BERLIN, Germany - Warring factions engaged in the Libyan conflict and UN-Secretary General Antonio Guterres will take part in a ...

Jailed U.S. citizen who demonstrated against Egyptian coup is dead

CAIRO, Egypt - The death this week of Mustafa Kassem, an Egyptian-American imprisoned in Egypt after an unfair trial, underscores ...

BALTIMORE, Maryland - After just a few hours of playing baccarat at a Maryland casino in September 2017, Chenguang Ni ...

WELLINGTON, New Zealand - The New Zealand government's books are in good shape with the accounts in surplus and expenses ...

SYDNEY, Australia - Stock markets in Asia finished in the black on Friday, despite the release of economic data in ...

WELLINGTON, New Zealand - The New Zealand government's books are in good shape with the accounts in surplus and expenses ...

MANILA, Philippines - The Asian Development Bank (ADB) returned to the U.S. dollar bond market on Wednesday with the pricing ...

SYDNEY, Australia - Stocks in Asia were mixed on Thursday, despite the historic signing of a new trade deal, or ...