U.S. president storms out of meeting in a rage 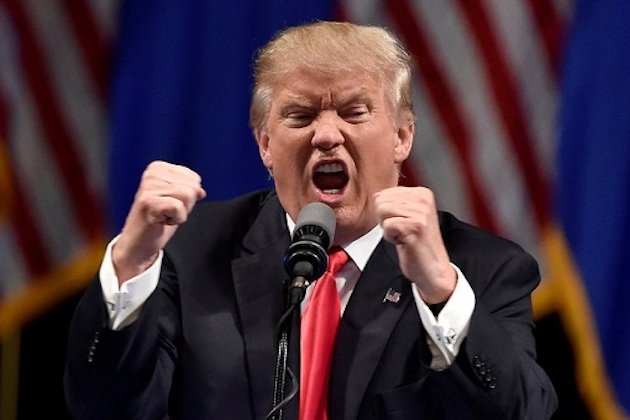 In a lengthy statement he derided Democrats, kept repeating that the Mueller investigation found "no collusion," described himself as the most transparent president in the history of the United States, kept referring to the 'i' word but not impeachment, referred to himself continually in the third person (President Trump), and kept saying that while there was no collusion, no obstruction, that 'the crime was on the other side.'

The rambling rant allowed the president to vent his frustration and anger, just minutes after storming out of a meeeting with Democrats including House leader Nancy Pelosi. He walked into the meeting which was to be about infrastructure, and then announced he wasn't staying because Pelosi in an interview prior to the meeting had suggested he was involved in a 'cover-up.'

"I came here to do a meeting on infrastructure with Democrats, not really thinking they wanted to do infrastructure or anything else, other than investigate. And I just saw that Nancy Pelosi, just before our meeting, made a statement that "We believe that the President of the United States is engaged in a cover-up," he told reporters on Wednesday morning.

After zig zagging through a number of subjects he came back to the meeting, to repeat what he had said earlier.

"And I said, "Let's have the meeting on infrastructure. We'll get that done easily." That's one of the easy ones. And instead of walking in happily into a meeting, I walk in to look at people that had just said that I was doing a cover-up. I don't do cover-ups. You people know that probably better than anybody," he said.

And so the rant went on.

"Well, it turns out I'm the most - and I think most of you would agree to this - I'm the most transparent President, probably in the history of this country. We have given - on a witch hunt, on a hoax - the whole thing with Russia was a hoax, as it relates to the Trump administration and myself. It was a total horrible thing that happened to our country. It hurt us in so many ways," Mr Tump said.

"And I was just looking at a list of some of the things that we just did: more than 2,500 subpoenas qualified for. And I let everybody talk. I let the White House Counsel speak for 30 hours. Thirty hours. I have 19 Special Counsel lawyers; 40 FBI agents. I said, "Open it all up. Let them have whatever they want." Nearly 500 search warrants. Think of that: a search warrant. Did you ever see a search warrant before? Neither did I. This was over 500 search warrants," said Trump.

"And of the 19 people that were heading up this investigation, or whatever you want to call it, with Bob Mueller, they were contributors to the Democrat Party, most of them, and to Hillary Clinton. They hated President Trump. They hated him with a passion. They went to her big party after the election that turned out to be a wake, not a party. It was a wake. And they were very angry."

"These are the people that, after two years and 40 million or 35 million dollars - it'll end up being a lot more than that by the time all the bills are paid - this is what happened. No collusion. No obstruction. No nothing," the president said.

"They issued 50 orders authorizing use of pen registers. Think of that, though. Five hundred witnesses. And then I have Nancy Pelosi go out and say that the President of the United States engaged in a cover-up."

"The bottom line is they said there's no collusion. No collusion with Russia. You heard so much talk about phone calls that my son made to me from this meeting that was set up by GPS Fusion, it looks like - which is the other side, for those that don't know."

"And for a year, I heard about phone calls went to a special number unauthorized. And it would have been my son, Don - who's a good young man, who's gone through hell. And they were calls that must have been made by him before and after the meeting - three calls," said Mr Trump.

"After massive study and work, they actually found who made the calls. One was a friend of ours - a real estate developer. Great guy. Most of you know him. Nice guy. He loves our country. And the other one was the head of NASCAR. Two of them."

"So, of the three calls that were so horrible that he had a meeting and he called me and then he had the meeting after and he made two more calls - and they were written about like this little - little lines, couple of lines. Nobody wanted to admit it," the U.S. president told reporters.

"Even last night, we had a great election. I went there on Monday. We had a - an election for Fred Keller. It was a 50/50 shot, and he won in a landslide. We went and we did a rally. Hardly mentioned today. And yet, if he lost, it would have been the biggest story in the country - even bigger than this witch hunt stuff that you guys keep writing about."

"This whole thing was a take-down attempt at the President of the United States. And, honestly, you ought to be ashamed of yourselves for the way you report it so it dishonestly - not all of you, but many of you. The way you report it."

"Drug prices are coming down - first time in 51 years - because of my administration. But we can get them down way lower working with the Democrats. We can solve the problem on the border in 15 minutes if the Democrats would give us a few votes."

"So I just wanted to let you know that I walked into the room and I told Senator Schumer and Speaker Pelosi, "I want to do infrastructure. I want to do it more than you want to do it. I'd be really good at that. That's what I do. But you know what? You can't do it under these circumstances. So get these phony investigations over with."

"They want to interview Jerry Nadler, who's been an enemy of mine for many years. He fought me in New York - unsuccessfully, by the way. I've had great success against Jerry. But he was representing Manhattan, and he would fight me all the time on the West Side railroad - many times, very unsuccessfully. He failed. I come to Washington. I've become President. And I said, "Oh, no, I have Jerry Nadler again?""

"But they want to make this a big deal. Whether or not they carry the big "I" word out - I can't imagine that, but they probably would because they'd do whatever they have to do."

"I'll tell you, there's a danger here. If someday a Democrat becomes President, and you have a Republican House, they could impeach him for any reason - or her. Any reason. We can't allow that to happen. We can't allow it to happen," Trump said.

"So when you look at all of the transparency, when you look at all I've done - and I will tell you, my lawyers say, "You don't have to do this. You can use presidential privilege. You don't have to let your lawyers and all of your staff testify. You can use presidential privilege, sir." "Would you recommend it?" "Well, you can be transparent or you can be tight. Being - if you've done nothing wrong, being transparent is better.""

"So I said, "I did nothing wrong. Let's be transparent." So that's what you have. All of these things - look at that - all of these things. Five hundred witnesses that I allowed to testify. It's a disgrace," said the president.

"So when they get everything done, I'm all set to - let's get infrastructure. Let's get drug prices down."

At this point a reporter asked the president a question. "Did Nancy Pelosi give you any assurances that they won't - the House won't look for (inaudible)?"

"Look," said Trump, "this was very sad because this meeting was set up a number of days ago at 11 o'clock."

"All of a sudden, I hear last night, they're going to have a meeting, right before this meeting, to talk about the "I" word. The "I" word. Can you imagine? I don't speak to Russians about campaigns. When I went to Wisconsin and Michigan and Pennsylvania, I don't say, "Oh, let's call Russia. Maybe they can" It's a hoax. The greatest hoax in history," he said.

Asked if he viewed Congress as a co-equal branch of government? And does he respect their power of oversight?

The president replied: "I respect the courts. I respect Congress. I respect right here where we're standing. But what they've done is abuse. This is investigation number four on the same thing - probably five. And it really started, I think, pretty much from the time we came down the escalator in Trump Tower."

"So I say to you that we're going to get everything done. We're doing a lot without them. Let them play their games. We're going to go down one track at a time. Let them finish up. And we'll be all set," added the president.

Pelosi later, in talking with reporters after the blow-up, questioned Mr Tump's mental fitness, saying that the administration or the president's family needed to intervene.

"I pray for the president of the United States. I wish that his family or his administration or his staff would have an intervention for the good of the country," Pelosi said.

"Maybe he wants to take a leave of absence."

Asked whether she was concerned about the president's well-being, she replied: "I am."