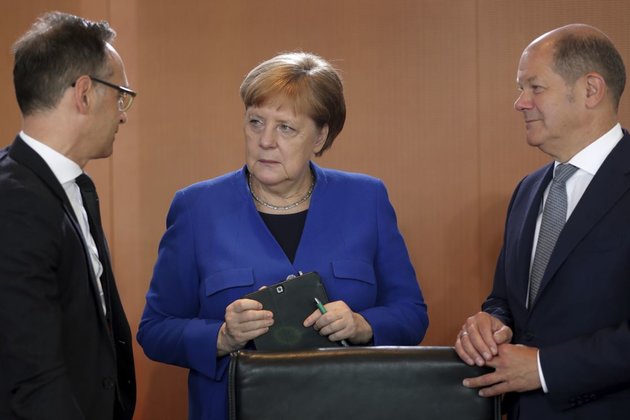 BERLIN - German Chancellor Angela Merkel says that Europe needs to 'reposition' itself in a changing world and is welcoming European powers' unity over Iran, a contrast with their deep divisions over the Iraq war 16 years ago.

Merkel said in an interview with Germany's daily Sueddeutsche Zeitung released Wednesday that Europe needs 'forward-looking' arguments and stressed that 'simply pointing to seven decades of peace is no longer enough to justify Europe.'

Before European Parliament elections May 23-26, she said there is 'no doubt that Europe needs to reposition itself in a changed world,' in which some post-World War II certainties no longer hold.

Merkel acknowledged that Europe appears weak in the standoff over Iran because, with the dollar's role as a leading global currency, it struggles to counter U.S. sanctions as it tries to salvage the nuclear deal with Tehran. But she said that Europe has also made progress.

'Germany, France and Britain are taking a different approach from the U.S. on the question of the Iran agreement,' she was quoted as saying. 'For all our other differences, we even have common interests here with Russia and China.'

'That Europe is no longer divided on this important question as it was in the Iraq war is a value in itself,' Merkel added. Germany and France opposed the U.S.-led war in Iraq in 2003, while countries including Britain and Poland supported Washington.

However, she added that Europe has a 'realistic' assessment of its capabilities and 'must strengthen them for the future.' She said it is making good progress on defense cooperation.

Asked what effect global challenges from China, Russia and the U.S. are having on Europe, she said that they are making the EU find common positions, which is often difficult 'but we succeed' - for instance in policy on Ukraine and Africa. She conceded that 'our political strength doesn't yet match our economic capabilities.'

Next week's EU elections are expected to boost populist parties at the expense of the political center.

Asked how much populism the 28-nation EU can take before it collapses, Merkel said that 'this is indeed a time when we have to fight for our principles and fundamental values.'

European leaders will decide 'how far to let populism go, or whether we ultimately have the will to take on joint responsibility.'

'So far, we have always managed to do so,' she added. So as not to endanger Europe, she said, 'everyone needs to put themselves in others' shoes, to be willing to compromise, remain honest and always treat each other carefully.'

North Dakota pipeline supported by Trump ordered to be closed

A U.S. federal judge ruled Monday that a controversial pipeline that runs through Native American lands in North Dakota be ...

Yair Netanyahu making name for himself at home and abroad

JERUSALEM - As scandal-plagued Prime Minister Benjamin Netanyahu stands trial for corruption, his 28-year-old son has emerged as a driving ...

WASHINGTON, DC - Broadway actor Nick Cordero, aged 41, has passed away after a long battle with coronavirus.According to Variety, ...

One of the lessons the current coronavirus pandemic has taught us is that we depend on electronic devices more than ...

Demand for oil may have peaked

PARIS, France - Although crude prices have rebounded from coronavirus crisis lows, oil executives and experts are starting to ask ...