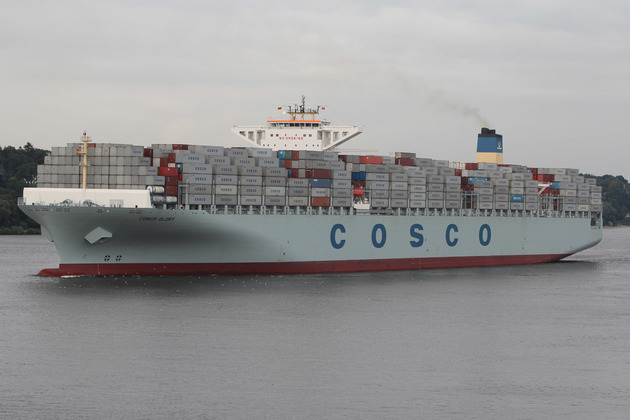 BEIJING, China - The major Chinese shipping group Cosco is planning to add mega-ships to its container carrier fleet, according to media reports.

The vessels, known as ultra-large container ships (ULCS) have been ordered just days after Maersk Line ordered 11 similarly-sized vessels of 19,630-teu each.

Hapag-Lloyd is also now rumoured to be on planning to place an order for several ULCSs, but there is no word yet on the capacity for these newbuilds.

The teu capacity figure for each of the deals refers to the container carrying capacity of the ships, with teu representing a twenty foot equivalent unit, or one 20-foot shipping container.

The spate of new orders puts further pressure on the already depressed rates on the flagship Asia-Europe service, which is currently suffering from record low rates as a result of oversupply of capacity.

And the orderbooks for 2018 and 2019 are also being filled, with the Cosco order representing the latest addition.

Drewry has forecast that all newbuildings of 14,000-teu or above, representing a combined capacity of 503,000-teu to be delivered in the remainder of 2015, will be deployed on the Asia-Europe route.