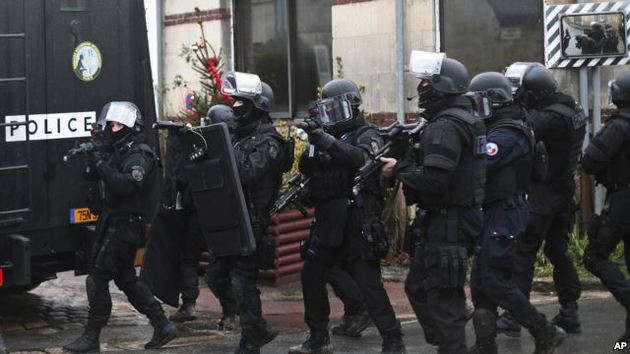 In the wake of the massacre Wednesday in Paris, European security officials are re-visiting their plans for countering what they see as a growing jihadist threat and what to do with young disaffected Muslim men either returning from combat in the Middle East or radicalized via the Internet by militant groups fighting there.

They warn though there is no such thing as absolute security.

While a massive manhunt continued for the two suspects - French-born Algerians Cho?rif and Sao?d Kouachi - broader questions are being raised already over how the attack could have happened despite a robust intelligence and surveillance system in France.

France's Prime Minister Manuel Valls told reporters Wednesday in the French capital that even with good intelligence services there is a "no zero risk." He also emphasized that several terror plots had been thwarted in recent months.

What is alarming, though, to security officials and analysts is how the Kouachi brothers managed to secure the automatic weapons, and possibly a rocket-propelled grenade launcher, and plot the assault without triggering preventive action by French authorities.

Both suspects had well-known militant histories stretching back to at least 2005. Cho?rif was convicted in 2008 in a case connected to jihadist recruitment of fighters against Americans in Iraq, serving 18 months of a three-year prison sentence. And in 2010, he was arrested again - although not charged - for alleged involvement in a failed plot to help an Algerian Islamic militant escape from a French jail, according Le Monde newspaper.

Analysts are asking, if French intelligence can't stop known militants from launching murderous attacks, how can authorities hope to counter threats from those who are not known yet?

According to Claude Moniquet, director of the European Strategic and Intelligence Center, a Brussels think tank, an urgent task will be to establish whether the assailants, who were skilled with their weapons and tactics, had gained training and combat experience overseas. "I suspect they had training elsewhere, but an investigation will have to establish these details," he said.

If it emerges the pair did travel to the Mideast, alarm bells will ring even louder.

An estimated 1,000 French militants have either left to fight for jihadist groups in Syria or already returned. At least 3,000 Europeans are believed to have volunteered to fight with Islamic militant groups in Syria.

In the summer European security ministers adopted an action plan to tackle the security threat they believe these fighters pose to their home countries.

Some of the measures are not known but those that are aim at identifying militants already in Syria and those likely to enlist. The plan included greater intelligence-sharing procedures among European Union countries, according to the bloc's counter-terrorism coordinator Gilles de Kerchove.

At a press conference to announce the action plan he said that not all of the returnees "intend to carry out attacks, but some of them will."

In November, EU security ministers met again to discuss tightening security checks on their borders and the sharing of passenger records. But European right-to-privacy rules and European Parliament objections are delaying some of the surveillance measures the ministers are keen to implement. Security officials say they need quickly to require all airlines to include passenger data in a digital system, allowing European intelligence agencies to know the name of every person who enters, leaves or crosses the EU.

The European Commission will submit new proposals to fight terrorism in the next few weeks, Commission President Jean-Claude Juncker said Thursday. "I know from experience that one should not react on the moment to such events given the risk of doing either too much or too little," he said. But he noted further measures were needed.

EU states have been toughening their own national anti-terror laws. In a bid to curb the flow of French militants to Syria, the French government introduced legislation a few months ago making it easier to detain suspects at airports and to confiscate their passports.

European governments have increased their intelligence endeavors by working with Muslim communities and mosque leaders to discourage recruits from heading out and by monitoring social media sites in an effort to identify those who have gone to join militant fighters in the Middle East.

Last year, the then counterterrorism chief of London's Metropolitan Police appealed to Muslims across the UK to help stanch the flow of young Britons heading to Syria. At least 500 British Muslims are thought to have gone to Syria. Commander Richard Walton admitted that authorities are "desperate" to obtain further assistance.

Britain's interior minister Theresa May Thursday chaired an emergency meeting of the British government's COBRA security committee to review what had happened in France and to decide whether there needed to be any changes in UK security plans. The panel ordered a ramping up of border security. "Following the attacks we took the precautionary step of increasing security at the French-UK border," she told reporters in London.

And British politicians appealed for Muslim communities to be more vigilant for jihadist outliers. But critics warn there are risks in targeting local Muslim communities and making them feel under pressure to collaborate with authorities. The effort can come off as discrimination, further alienating young and disaffected Muslims and presenting recruitment opportunities for militants.

In the UK, police have been aggressively using counter-terrorism legislation to detain and question anyone, even without reasonable cause for suspicion. More than 60,000 people were detained for up to nine hours in 2012 and 2013 but all those stops and interrogations resulted in just 24 terrorism-related arrests.

Asim Qureshi, research director of CagePrisoners, a civil libertarian campaigning group, says the approach is too intrusive. He told the Al Jazeera news network, "For example, they get asked, lsquo;what type of Muslim are you? What are your foreign policy opinions? What are your views on Palestine?' None of those questions pertain to whether that person poses a credible risk to UK security."

European leaders and their advisers have also been delving into the question of what to do with fighters who have returned from the Middle East. Should they be arrested and prosecuted for fighting in a foreign war, if there are laws available to do so? Is it better to monitor returnees, rather than risk further radicalization in jail? Should returnees be required to go through de-radicalization programs? None of the individual states of the bloc have found answers to those questions, so an EU consensus remains far off.